Home Internet Facebook See who blocked me on Messenger even if it’s a friend on... 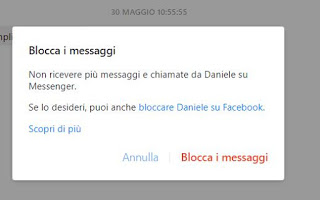 One thing that not everyone knows about Facebook Messenger is the possibility of being able to block someone, without, however, taking away the friendship on Facebook.
In practice, we remain friends on Facebook, but messages sent by those who have been blocked cannot reach us.
Obviously, those who are blocked have no notification and can write messages as much as they want, perhaps thinking that the recipient reads them without answering.
To avoid writing messages in a vacuum, in the absence of a clear indication that our messages are actually read to a Facebook friend, let’s see what is the clue that makes us understand that a contact blocked us on Facebook Messenger.
What is important, above all, is to understand if that person has blocked us or if he has deactivated the account.First of all, let’s remember what it means to block a user on Facebook there is a big one difference between the terms “blocked” and “deleted”.
In summary, terms, when someone hangs up on Facebook, this person can not only no longer contact us and ask for friendship, but will not even see our profile anymore and will not even be able to read what we publish.
This is a complete block, which prevents any contact attempt.

If you delete someone from friends, they can still see our Facebook profile, the things we publish with public visibility and even contact us via Messenger.
If you delete a person’s friendship without blocking it on Messenger, their messages will still be received in the mailbox “Message requests“, the one that contains messages received from all non-friends.

Note that if I and the person who blocked me on Messenger are added to the same group of conversation, Facebook will notify those who put the block, so that it can choose whether to join the group or refuse.

See who blocked me on Messenger it’s pretty simple.
Both from the PC and from the Messenger app on the smartphone, when a message is sent and the reply is immediately received “This person is not available at the moment“, then we were blocked and the message will not be read by the recipient.
Furthermore, we will never be able to make voice calls to him because even Messenger calls are blocked.
If we have been blocked on Messenger by a Facebook friend we will not find the button to call, which is normally present

The only other reason why the writing may appear “This person is not available at the moment“is if the person we write to has disabled the account.
To check, just try opening his Facebook profile and see if the page is available.
If it is and we can read the data and its posts, then the account is not deactivated, but we were actually blocked in chat.

How do you block someone on Messenger leaving him among Facebook friends?

You can block messages from a friend or even a stranger on Messenger both from PC and from the app on your smartphone.

On PC, open the Facebook message list or open the www.messenger.com page, search for the name of the person to block, then press the button at the top right.
In the tab information, next to the name, click on the gear button and then on Block messages.

app’s the same thing: look for the name, on Android press the key with the in the top right corner, while on iPhone press the name at the top to see the information.
Then scroll down the options tab and activate the one that blocks the messages.

READ ALSO: Find out who blocked us on Whatsapp

How to uninstall Windows updates if they cause errors