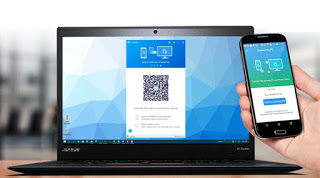 For send files, photos, music, videos or more from your computer to your Android phone or tablet or, vice versa, to transfer photos and other files from the phone to the PC, there are different modes, more or less comfortable depending on the habits.
A standard method is certainly to connect the smartphone to the PC via a USB cable, displaying the Android memory as if it were a USB stick into which or from which to drag files.Wanting to avoid using the uncomfortable cable and having a more fast file transfer in wifi, then you can use specific applications to send files between PC and Android, easy to use and free.

READ ALSO: Transfer everything via web between Android, iPhone, and PC

1) Transfer files between PC and Android on Wi-Fi network

The best way to transfer files between PCs and Android is to send them over a shared wireless network.
There are many apps that can be used to share files in a home network (if the devices connect to the internet with the same wifi router) and one that is simple to use and very convenient is Portal, of which I had already spoken in the guide on how to transfer files from PC to smartphone.
Portal is really immediate in its use, just install the application, open it on the Android phone and then use the button to scan the QR code that is on the website page portal.pushbullet.com/.
Once the code has been recognized, simply drag the computer files into the Portal web page and release them to send them to the phone.
In this way, you can send on Android all the files you want, without size limitations and at the speed of the wifi connection, very fast.

Alternatively, you can use what is already the most widely used file transfer application in the world between Android and other devices, ie ShareIT, available as an app for iPhone, Android, Windows, and Mac.
Speaking of Windows, to connect the phone to the computer it is necessary to install the ShareIT program on the PC.
A QR code appears on the computer program that can be scanned by the camera app on Android to create the connection and transfer the files.
Although this can be considered an inconvenience, having ShareIT installed on a PC and phone has the advantage of being able to make transfers between devices of any file, including applications, photos, videos, music and everything else.
The app is well structured and allows you to browse the phone files and select even more than one to make a multiple send.

Another way to transfer files in wifi is to use the Windows file-sharing function and use an app like ES File Manager.
In this regard, we have written a guide on how to access the Windows shared folders from Android in wifi.

2) File transfer between Android and PC with Bluetooth

If you don’t want to use external applications, you can send files between PC and Android using the Bluetooth connection, which is not convenient for large transfers but works well for occasional transfers.
Obviously, on the PC, the BlueTooth must be active and in this regard, I refer to the specific guide to connect the Android smartphone to the Windows 10 PC via Bluetooth.
In summary, the procedure to send files via Bluetooth from your PC or PC from Android is as follows:
On the PC, go to the Bluetooth settings (looking for “Bluetooth” for the Start menu).
Select the Android phone from the list of detected devices and associate it by entering the security code that can be read on the smartphone screen.
Use the “Send or receive files via Bluetooth” option to the right of the Bluetooth options on the PC to allow file reception.
Find the file to send to your phone and use the menu to share it via Bluetooth, selecting the associated PC.

Cloud drives still remain simple and convenient alternatives to use for file transfers between devices.
You can then use the cloud drive app on your phone to upload a file and then find it from the PC on the application site or, if the Windows program is installed, directly copied to the cloud destination folder.
Among the best app “cloud storage” on Android to synchronize files from the PC and the internet there are certainly Google Drive, Onedrive and Dropbox, industry leaders.

4) Send files via SMS or Whatsapp with an Android phone it is possible, even if with different limitations.
More than Whatsapp it is perhaps much more convenient to use an app like Telegram, create a chat with yourself and connect to Telegram also from the PC to make transfers.
In another article, we then saw how to transfer files using the cloud space of Telegram and Whatsapp.

5) The app Pushbullet it’s also pretty handy for transferring files.
If you already use Pushbullet to receive phone notifications on your computer, then it will also be easy to send files and photos between PC and Android.
You can then install Pushbullet on your phone and then as a Chrome extension, connect to the same account and then use the send file function to make transfers.

6) The app AirDroid, the best way to manage your Android phone from your PC, allows you to transfer files easily between PC and phone.
Airdroid has the advantage of not requiring the installation of a program on a PC, but of being based on a web interface to be opened on the browser (Chrome or Firefox).
On the app and on the PC you will then find the transfer function, to send files between the various devices.

With Mame, the emulator is played on PCs in the old arcades of arcades

Get the computer back in again without reinstalling Windows