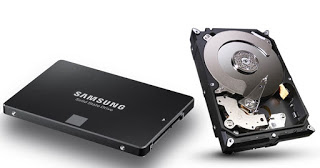 Until recently it was assumed that there was a hard disk which is a disk that stores a large amount of data and allows you to start the operating system and programs at any time. These disks quickly became a bottleneck compared to the performance of the other PC components (RAM and CPU), often slowing down the startup of the machines or the startup of one or more programs simultaneously.
In order to solve this speed problem, it was necessary to introduce a new technology to store data on high-speed computers: the SSD, or solid-state drive.
Let’s see in this complete guide why it is better to focus today only on SSDs and what are the strengths and weaknesses of both technologies in comparison.

What do SSD and HDD mean?

The traditional hard disk, called with the acronym HDD, is the fixed memory of a computer, the one that is not erased when we turn off the computer (as RAM does). Hard disks are essentially thin plates with magnetic coating where data is stored by an electromagnetic head which, scrolling on the plates, saves, and reads the stored data in the form of small magnetic points. 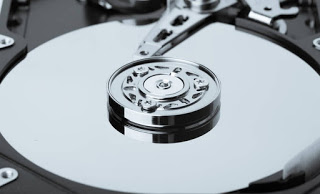 The disc platters turn and allow the head to read and write new points, which are read as if they were single bits (and as we know the bits are the fundamentals of information, present in every single file).
Hard disk technology, to make a little history, is quite old (in terms of computer history). You can start with the infamous 1956 IBM 350 RAMAC with 24-inch wide cymbals and 3.75 MB capacity. Today’s drives are 2.5 or 3.5 inches and use SATA interfaces on most PCs and Macs. Capacities have grown from those few megabytes to more terabytes, an increase of millions of times over 50 years ago.

The SSD it always keeps the information in the form of bits but has a different construction: instead of having a magnetic plate that turns they present themselves inside with numerous flash memory chips completely similar to those of USB sticks, capable of keeping data in memory even if there is no power. 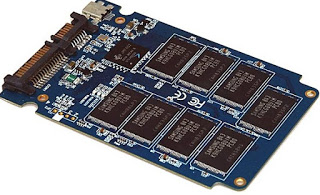 There is no spinning platter or no head running on the surface to read and write data: everything happens instantly, with much higher access speeds than the faster HDD (which still has the physical limit of the platters that turn and of the head, which make them lose access speed).
This also explains why SSDs are significantly faster and more snappy than any mechanical disk, as we will also see in the next chapter where we will talk about the strengths and weaknesses of both technologies.

What are the strengths and weaknesses of the two types of discs? 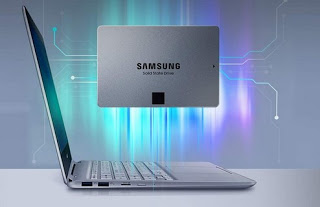 SSD and HDD do the same job to boot the system, load programs, store personal files. There are however many differences, in terms of advantages and disadvantages, in the use of an HDD or SSD solid-state drive that have made the choice on SSDs (in fact the storage media of the present) in recent years.

Price
SSDs were definitely very expensive when they appeared on the market, making HDDs a good budget choice in making a home PC.
Today, however, SSD prices have really plummeted too if they are still more expensive than HDDs: we can get a good 1TB fast SSD for just € 110, about double that of an HDD of the same capacity.

Speed
The SSD is unrivaled: it is currently much faster than any traditional hard drive on the market and is the only way to speed up all PCs and overcome bottlenecks in the data processing.
A PC with SSD is able to boot in seconds and will continue to be faster than an HDD during normal operation. A PC or Mac with SSD is able to load programs faster with much better performance. This marked improvement in performance does the SSD is the perfect disk to install the operating system and programs.
In recent times, reliability in data retention has also increased, making SSDs the ideal solution also for storing personal data (photos, videos, documents, etc.).

Fragmentation
HDDs have the bad defect of fragmenting the files that are saved on it since it is not possible to know where the head will be at the time of writing. When hard disks start to fill up, large files can be scattered across the disk tray, that is, fragmented: this leads the operating system to slow down further since a single file will have to be recovered at several different points on the same disk.
In SSDs, on the other hand, the files are saved on contiguous blocks of the same chip: fragmentation is a concept that does not exist on SSD drives.

Duration
An SSD has no moving parts, so it is more difficult to break than the HDD which instead always moves (both the dishes and the head) and has a high risk of sudden errors, especially after a few years of constant use. The life of an SSD is however limited to a certain number of writes on each cell that makes up the chip and we must regularly empty the cells that have remained occupied from the electrical point of view.

Fortunately, technology has gone on and on and today we can maintain a performing SSD without losing any cell, especially if we read them precautions for maintaining the SSD and our guide on things you should never do on computers with SSDs.

dimensions
Since hard drives rely on turntables, they can’t be as small as SSDs, which can really be very small.
By now all SSDs have the same dimensions as an old 2.5-inch hard disk (those for laptops), even if the new versions of SSD are as big as small long and thin cards (the M.2, which we will talk about in next chapter).

Noise
SSDs are very quiet disks since there are no turning platters or moving heads; on the other hand, HDDs always make a certain noise when moving.

The evolution of SSDs: M.2 or NVMe cards

SSDs have evolved so rapidly that they have radically changed shape and become even faster: they were born that way M.2 or NVMe cards.

These small cards connect in the appropriate slots of the new motherboards (therefore no cable to use) and they offer much higher speeds than older SATA SSDs thanks to sharing the bus with other controllers (the fastest are the ones they share the PCI-Express slot bus, although there are models that also take advantage of SATA).
These cards are very expensive but also small and compact, ideal for creating small gaming PCs or as internal notebook memory. One of the best NVMe cards that we can view is the 1T Samsung 970 EVO, Pcle NVMe M.2 (179 €).
To learn more about these new memory cards, please read our guide What is M.2 SSDs, how to mount them, and where to buy them.

Summing up the current state of technology SSD drives work better, are faster, stronger, quieter and more durable, therefore we must focus on them for each new PC we have in our hands and immediately think of an update of the old computers that still have mechanical disks, so as to benefit from a significant speed increase. In other articles we have seen:

If we don’t know how to move Windows and programs from an HDD to an SSD, please read our guides Move Windows to SSD without reinstalling everything is How to replace the hard drive to upgrade your PC in an hour.
Old mechanical disks can still be used as external USB hard disks, using SATA cases or adapters like the ones we showed you in the guide How to connect disks to PC via USB: SATA adapters, cases and docking stations.

How to join RAR or ZIP files

How to adjust webcam settings (contrast and brightness) on Windows PC