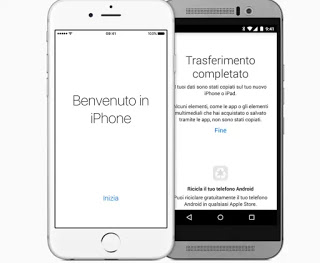 If you change your smartphone and switch from an Android system (like the Samsung Galaxy or any Huawei, Motorola, LG, HTC, Xiaomi phone, etc.) to one with an iOS system (ie iPhone), you may find it difficult to transfer data from one cell phone to another.
Fortunately, there are two ways to switch from an Android phone to an iPhone so you don’t lose your phonebook, messages, photos, and other data, without suffering any shortcomings on the new Apple smartphone and forgetting the old phone that can be reset and recycled or sold.
In this guide, we are going to discover both ways, one based on direct transfer, one based on the cloud, which also becomes the only one possible if the old Android phone had been broken, lost or stolen.

1) The first way to switch from Android to iPhone is using the application for Android Move to iOS, developed by Apple (and also the only Apple app on the Google Play Store along with Apple Music).
This application was created with the specific purpose of transferring data, music and even account passwords to the new iPhone (which has at least iOS 9 and at least iPhone 5).
To use the Move to iOS app it is only necessary to start the iPhone with the initialization procedure, ie one of the first configurations after buying it.
If this procedure had already been performed, it can be repeated by going to Settings> General> Reset> Initialize contents and settings.
During the first configuration or initialization procedure, after the request to set a security code, the screen will appear App and data with the option for migrating data from Android until a ten-digit code is displayed.
Obviously both the iPhone and the Android phone must be connected to the same wifi network.

On the Android smartphone, open Move to iOS, follow the wizard and enter the code when prompted.
At this point, the coupling is done and you can start choosing which data needs to be transferred.
You will be asked if you wish to transfer Google account information (so you can quickly access from the new iPhone), Chrome bookmarks, text messages, contacts and photos, and videos.
Some apps that were on the Android phone will also be automatically downloaded.
The Android phone will transfer the selected data to the iPhone and insert the contents into the correct apps.
Once the transfer process is complete, tap on Continue iPhone Configuration to log in with an Apple ID.
Once the installation process is complete, you will be asked to log in to the accounts transferred from the old Android device.
The transfer procedure varies depending on the amount of data you are transferring, especially if you were storing many photos and videos.

2) The second way to switch from Android to iOS and transfer data to the iPhone new is to use Google services.
Unless there is an a priori aversion, Google apps also work very well on an iPhone, so there is no reason to ignore them and even changing phones you can continue using the various services offered.
Since every Android user, to use the phone, must have logged in with a Google account, he will have already automatically stored and saved all the important data in his special applications.
In particular, we have already seen in another article the guide for transfer contacts from Android to iPhone using a Google / Gmail account.
In summary, the process is based on the fact that Google stores the contacts of the Android phone in its address book, then, adding a CardDav account in the iPhone settings (under the contacts and mail section).
Automatically the iPhone address book will be populated with numbers and email addresses that were saved on the Google address book, via the cloud, without direct transfer.


To transfer photos and videos, instead, just activate the automatic photo backup with Google Photos on Android, download Google Photos on iPhone and find all the photos taken with the old phone.

THE Whatsapp messages can only be recovered on the new phone in part and there is no way to transfer the backups made on Android into an iPhone.

For the SMS messages, there is also no manual way to transfer them, although it is possible to use a program to synchronize Android on PC, which also works with the iPhone so as to take them from the PC to iOS.

As for the music, the best way to transfer it from one phone to another is to upload it to Google Play Music, which is free in backups.

Almost everybody switches from Android to iPhone and wants to keep the same apps Google app for iPhone, like Google Drive, Maps, Photos, Keep, Youtube and many others.