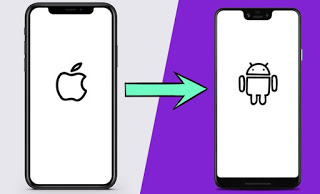 If you are fed up with Apple's iOS operating system restrictions and want to try harder, before you do the leap from iPhone to Android it is worth knowing what to expect, how to adjust, how to find all the functions, how to configure the mobile phone and what differences there are, since we will not always find the keys and gestures we were used to on an iPhone (even more so if we used an iPhone X or later).
While both operating systems have their pros and cons, iOS users often find themselves frustrated by the unbearable blocks imposed by Apple that prevent them from using their mobile as you would a normal computer.
In this post we will show you then the main differences between Android and iOS and how to make the switch from iPhone to Android in complete safety and keeping the personal data, contacts and messages exchanged so far.

Depending on the version of the iPhone we come from, we will be used to the famous central button (up to the iPhone 8 Plus and now re-proposed on the new iPhone SE) or to the gestures on the edges of the screen (from iPhone X onwards).
Also on Android we can find two models with which to manage the interface:

The Back button is perhaps the most difficult to understand because it works differently in each case. In most apps, it will go back to the previous screen, but if it is the last one, it will go back to the home and exit the application.
Fortunately, on Android smartphone models we can recall the gestures, so as to have an experience very similar to the iPhone; by choosing the gesture system also on Android we will notice very few changes, such as the absence of the upper right corner for the Control Center, replaced by the notification area and the quick keys on Android by sliding from the top edge.
In this regard we can also read our guide Guide to gestures on Samsung Galaxy and Android smartphones.

The key to open all apps

As on an iPhone, Android we can have many screens where to add application icons. On Android, however, we also find the Drawer button generally placed at the bottom, which serves to open the list of all apps. You can add apps to the main screen by opening the application list, tapping and dragging your finger wherever you want.
You can also do the same by tapping any empty space on the main screen by holding down for a moment until the menu asking which application to add appears.
On Android, you can create folders like you do on iOS by tapping, holding and dragging one application over another.
Organizing the Android home screen has several advantages, first of all because it is not necessary to view all the installed applications but only the favorite ones.
On modern smartphones with Android or with some new launchers we can also give up the Drawer button to open the list of apps by swiping from the bottom edge or making two or more touches on the screen, so as to combine the ease of use of Android with the user experience. from Apple.
In this regard, we advise you to read our guide on different launchers and graphic themes for Android.

On an iPhone, the Apple house forces us to use their applications as default and in many cases it becomes difficult to change them or use others in their place: they prefer to always pass everything through their apps.
In Android, on the other hand, you are free to choose the app you prefer and you can also change the app to read SMS, for Email, to surf the internet or even the app for making calls. To change a default application, just download the new one and open it, open a file or perform a certain action, so as to open the list of supported apps and choose the preferred one.
If you ever want to cancel this change, you can cancel the default choice by opening the menu Settings -> Applications and tapping the app you no longer want to use as the default.
On this topic we can also read our article How to change default apps on Android.

On the iPhone there is Siri, the virtual assistant that answers all kinds of questions; While Siri isn't perfect, it's one of the best features of iOS, although worthy rivals like Google Assistant and Amazon Alexa have appeared in recent years, both of which can be used on both Android and iPhone.
The voice commands are therefore also present on Android and work well for doing searches, for driving directions from the Google Maps navigator, for sending messages: to learn how to use the Google Assistant, we recommend reading our guides How to activate OK Google on Android is Android voice commands for making calls, reading SMS and voice notifications.

An iPhone is always the same and there are no other smartphones with the iOS operating system. However, when we switch to Android there may be aesthetic differences and even different features between one model and another, because Android is freely customizable by phone manufacturers.
Even though Android is Google it remains an open source system that can be adapted and installed on any smartphone. For this reason, Samsung adds some proprietary apps that are different from those of Xiaomi and Huawei. If you want an original Android smartphone, that is as conceived by Google itself, we must focus on the Pixel series models.
Updates are also not the same on Android phones: Pixels are the first to update when a new system version comes out, then the others have to adapt Android with their customizations and it can take a long time.
To find out which manufacturer updates the operating systems immediately, we can read our in-depth analysis Android updates: who faster among Samsung, Huawei, Xiaomi and other manufacturers?

Theoretically, the battery life of an Android smartphone and that of an iPhone are equivalent. In practice, it all depends on how you use your smartphone and how many apps we install on it, although it is possible to make the battery last much longer by reading our guide to Android apps to optimize battery and save energy.

All the apps available for iPhone are also present on Android in the Google Play Store, which is the equivalent of Apple's App Store. To download or buy applications you must use a Google account (a Gmail account or a YouTube account, which are the same thing, is fine) and the installation takes place automatically, even if you press the button Install on the application web page open on your computer. To buy apps you always use a Google account by registering your credit card in Google Play.
Some default apps change from iPhone to Android such as:

To start we can take a look at the list of best free android apps.

How to switch to Android if you had an iPhone

After seeing all the differences between Android and iPhone, in this part of the guide we will show you how to quickly switch to Android if we start from an iPhone. Luckily we can use online accounts and some apps that will help us with the migration.

By adding a Google account on the iPhone we will be able to quickly switch the contacts in the address book on the new phone, without too many thoughts since everything is synchronized online.
To add a Google account on the iPhone we open the app Settings, let's open the menu Password and account, we press on Add account and finally we select the item Google.
By entering the login credentials of a Google account ready to use, we can choose to immediately synchronize the contacts already present on the phone, so as to have them ready on the new Android smartphone.

On the same wavelength we can install the Google Photos app, Google Play Music and Google Drive on the iPhone, use the same Google account seen before and synchronize the photos, music, documents, images and videos present in the memory of the 'iPhone, so you can carry with you most of the multimedia files and data we care about.
To learn more about this transfer system we can read our guide Transfer Contacts, Photos and Apps from iPhone to Android on the new smartphone.

Among the systems that we can use to migrate from an iPhone to a new Android phone, the migration apps stand out, developed by some manufacturers to facilitate the passage of apps, messages, address book, SMS and app data, so as not to lose anything.
The apps we can try are:

We install the right app based on the model of Android smartphone in our possession and follow the instructions given to be able to migrate from an iPhone to the new Android phone.

Compared to a few years ago, where the only way to pass the address book was to use SIM cards, today it is possible to take advantage of different methods for switch to Android from iPhone, using online accounts or dedicated migration apps. If you switch from iPhone to Android remember that you can also install theHow2do app to follow this blog more closely from the new Android smartphone.

In another guide we showed you the points to start with your Android phone or tablet. If the differences between the two operating systems are not very clear, we can read the guide to Differences between Android and iPhone (iOS); which smartphone is better to buy?
Do we want to take the reverse path? Just read our guide Switch from Android to iPhone and transfer all data.

If WhatsApp backup won’t restore, how to fix

Spotify: official video podcasts. Farewell to collaboration with the Obamas