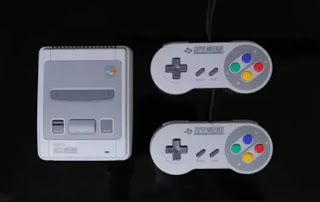 The world of video games is not very different from that of cinema and music, even the games of the past in fact still have a lot of attraction, despite 20 years of technological progress. The main difference between the modern games of today and those of 15 or 20 years is, apart from the graphics, in their simplicity. While today’s games require a certain amount of time and concentration, they are all online multiplayer and always require you to download new packages and new content, old games were perfect for quick games, they had no particular complexity, it was only a matter of moving a character and then leading, shooting and jumping all the enemies that met. In fact, old games were, in some ways, funniest than those of today.
For this reason, all the manufacturing companies have tried to bring back the simplicity of the old historical games, with new versions of the old and historic consoles that were sold 20 years ago, redone to be compatible with modern TVs and with the best games in it.
In the new versions of the old consoles, which are small compact boxes to be connected to the TV, dozens of games are ready with them to choose from. There are no cartridges to insert and games to buy (which among other things those for the consoles of the past are almost impossible to find).
Below we see then the best “retro” consoles, Mini or Classic, that you can buy today (or give away for Christmas) to play the games of the past, the great classics of 15 or twenty years ago, absolutely perfect for children to play and fun for adults who want an undemanding pastime.READ ALSO: Old PC games for free: DOS, the 80s / 90s, room, and console 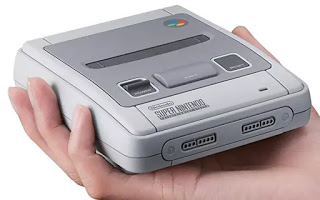 After the huge success of the NES Classic Mini, Nintendo returned to the 90s with a compact version of the SNES, one of the first 16-bit consoles with lots of games that have become cult titles. The Box connects to the TV via HDMI and includes 21 games preloaded and two mini controllers that will allow you to play in two. Among the best games, we have Mario World, Ghouls’n Ghosts, The Legend of Zelda, Final Fantasy III.
The disadvantage of Nintendo’s retro consoles such as the SNED is that once all the games are played, it will not be possible to add more because the SNES Classic Mini does not accept original cartridges and does not allow you to download new games.
You can buy the SNES Classic Mini On Amazon at 130 euros.

This is the mini version of the first Nintendo console, that 8-bit output in the 80s. The box connects to the TV via HDMI, contains 30 games integrated and an NES mini controller. Among the most famous games to play with the Nintendo Classic, we have Bubble Bobble, Donkey Kong, Dr. Mario, Ghosts’n Goblins, the first Mario Bros, Super Mario Bros 2 and 3, The Legend of Zelda and several others. Also in this retro console, it will not be possible to add other games to the list already ready.
This console is cheap, 50 euros on Amazon, but it is a purchase that I would not do since today we can take the best and most enjoyable SNES. 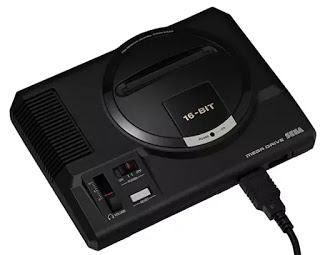 The Sega Mega Drive, which twenty years ago was a direct competitor of the SNES, is, however, better for the quantity and quality of the games it includes inside. The Sega Mega Drive mini can be bought for 80 euros on Amazon and comes with well 40 games inside ready to play including the historic Sonic The Hedgehog, Shinobi III, Mega Man, Street Fighter II, Ghouls’n Ghosts, Golden Ax, Wonder Boy, Tetris, Virtua Fighter 2 and many others. No other games can be added to this console which is produced directly by SEGA.

Unlike the Megadrive Mini, this console not only includes well 80 games inside, but also allows you to insert the original cartridges of the Mega Drive and, therefore, to play other games besides those included. In this console, there are two JoyPad Wireless
This console, produced by the Chinese company AtGames (not therefore by SEGA), can be bought on Amazon at 70 euros. Unlike the original Mega Drive, the new console supports wireless controllers.

This console is exactly the first Playstation, relaunched this year in its original version with many games included. Unfortunately, for this reason, the feeling is more that of having an old PlayStation, rather than a new retroversion. In this console, you cannot load the discs of the old Playstation 1 games. There are 20 preloaded games, including Final Fantasy VII, Grand Theft Auto, Metal Gear Solid, Resident Evil, Tekken 3, Tom Clancy’s Rainbow Six.
The console, including two Joypads, can be bought on Amazon at a price between 40 and 50 euros. 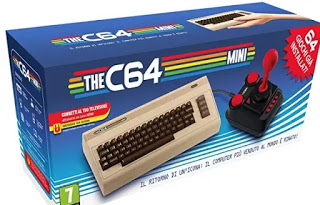 The Commodore 64 can be bought in a new Mini Console version that works exactly like its original version released thirty years ago. The C64 Mini, therefore, includes two USB ports (you can connect an external keyboard to program in basic because the keyboard of the C64 Mini is fake) and joystick to play 64 games pre-installed and immediately available. Through some hacks, it is also possible to load the ROMs by charging them from a USB stick.
The C64 Mini can be bought at the moment, at a price ranging from 50 to 70 euros on Amazon. 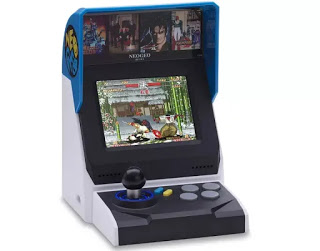 This is the most beautiful classic mini console ever, both for the quality of the games (for those who like fighting games) and for how it was designed. The NeoGeo Mini, in fact, is a mini-cabin with joystick and screen, which reproduces the arcade games of the arcades (once the NeoGeo games were the best in arcades). The console is not portable because it requires to be connected to the mains, but it is possible to connect it to the TV via the mini-HDMI port. The games included are memorable and we have, for example, King Of Fighters, Fatal Fury, Samurai Shodown, Metal Slug and many others. The only flaw is that the JoyPad must be bought separately.
The Neo Geo Mini can be bought on Amazon at a price between 80 and 100 euros.

The new Philips Screeneo U4 projector is in the pipeline