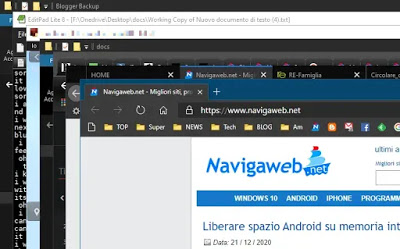 Windows 10 includes several ways to automatically organize open windows, but they are a bit hidden, and even if just a click away from the taskbar, if we don’t know, we could also end up ignoring them forever.

For example, by moving a window all to one side, it is then possible to tile windows by dividing the screen in two or even in four (by dragging the windows to the corners). You can do the same by pressing on an empty space in the taskbar with the right mouse button and using the option Put the windows side by side.

Still pressing the right mouse button you can choose the option to show stacked windows, which is another way of affixing them, dividing the screen equally.

With programs like Powertoys for Windows 10, it is then possible to activate additional special features, such as the one to create a customized window layout, choosing the size and shape of each open window.

We can still find many atria tricks to organize windows on the Windows desktop.

In this article, we discover another really useful, easy to use, and that makes the desktop very comfortable: the possibility of cascading windows, so you can keep open even ten or more scattered on the desktop, seeing their title so you can view them all together and quickly selecting them.

In Windows 10 you can right-click on the taskbar and select the option “Overlap the windows” to stack them. All windows that are not minimized will immediately be arranged in a cascading diagonal stack, one on top of the other, each of uniform size. Each window’s title bar will be prominently displayed, making it easy to click one of them with the mouse cursor and bring the window to the foreground. You can also click on the relative icon in the taskbar to bring them to the foreground.

Once the cascade has been created, it can be canceled by pressing the right mouse button again on the taskbar and selecting the option “Undo overlap all windows” From the menu. This will return the window arrangement exactly as it was before. However, if you move only one of the overlapping windows, then you will not be able to undo the cascade arrangement.

Note that the cascading windows feature was already an option in Windows 95 when computer resources were limited and low resolution. This type of view is very similar to the one that was obtained, until recently, by pressing the Windows-Tab keys together (today in Windows 10 the activity view opens).