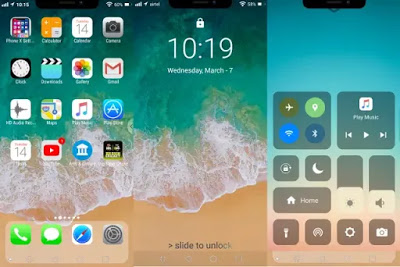 Who uses an Android smartphone, unless it is one of those under-cost, has nothing to envy to those who have an iPhone, because as an operating system for Android phones is better than iOS in many ways, for flexibility, for capacity customization and choice of apps.
One of the best capabilities of every smartphone Samsung, Huawei, LG and all those with the Android system is to be able to change the main applications, then choose the initial graphics by installing one of several Best free launchers for Android.
Among these, there are also some that make the screen of the Android phone practically identical to that of an iPhone, with the same layout of the icons, with a similar notification bar and also with a similar lock screen.
If you want to transform the Android smartphone Samsung, LG, Huawei into an iPhone you need to install one of these free launchers.NOTE: For copyright reasons, the apps that change graphics on the mobile cannot say they imitate Apple’s iOS, so here we point out the most similar ones that respect the agreement and that are not deleted from the Google Play Store for reasons of rights of use.

1] IOS launcher is the most recommended app, the one that turns your Android phone into an iPhone without any contraindications, changing icons and backgrounds and putting all apps on the main screen. This launcher also has the security lock screen and the iOS control panel. The icons are very similar to those of the iPhone and it is possible to group the apps in folders or uninstall applications as you do on iOS. Widgets and links are still working so, in fact, the Android experience blends with that of the iPhone.

2] iLauncher is another application that takes up the graphic design of the iPhone screen, a true launcher optimized for Android, which faithfully reflects the look of iOS by turning any smartphone into an iPhone. Simple and light, this launcher offers some nice visual effects and animations and some options to customize them.

3] iPhone X Launcher is a complete app that disguises any Android phone in an iPhone X. It changes the look of almost everything: the app search, the background, the screen lock, the control center and notifications with very noticeable results also demonstrated by the number of installations of this application.

4] Caller Screen Dialer is an app that changes the graphics of the telephone keypad, making it identical to that of an iPhone.

5] IOS Lock Screen and the iPhone lock screen, with the same icons, wallpapers of your choice and the same famous inscription “Scroll to unlock”. The app also transforms the appearance of notifications making them like those of the iPhone, then also the control center with the main buttons.

6] Control center is the app for those who want a keypad with the main switches of the phone that is similar or identical to that of the iPhone. You can customize the size, colors, and position of each switch as you wish.

7] Cleandroid UI is the best and free icon pack to change application icons by putting those typical of the Apple iOS system in their place, so you can easily recognize them if you used the iPhone in the past.

8] iOS Notify is the app to use to have the notifications screen the same as that of the iPhone. The app also includes the control center with the switch buttons.

9] Floatify is an app that shows notifications in the same aspect of iOS, without changing the lock screen.

10] The Evie launcher, one of the most popular and customizable in the store, can be configured to make the Home screen appear the same as the iPhone.
In short, you have to go into the settings and change the options as follows:
Such as Home screen set 4 columns, 6 lines, and icon size to 80.
Activate the labels, deactivate the background scrolling instead.
Enable the dock by maximizing the opacity slider, without labels.
The folder icons must be large 90, while as a notification indicator select Contactor with size 80.
In the search options, activate the option Frequently used apps.

Dead iPhone recovery, if it no longer turns on or does not charge the battery

How to reset Windows 10 (Reset PC)