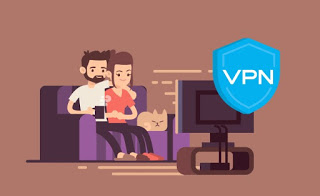 Using a VPN to hide one's identity has become one of the prerogatives of all users who use streaming devices to access Internet streams not available in Italy, such as the Netflix catalog present in the United States. The use of a VPN is also recommended when we configure the TV to manage the flows coming from an IPTV service, since this type of flows are often filtered or blocked by the Internet service provider (even legitimate and harmless ones).
Hiding your identity can be useful, but we must be sure that we can "hide well" on the device we use before buying a license for a Premium VPN, so as to avoid spending money on a service that we are unable to configure.
In this guide we will show you how quickly create a secure and encrypted VPN for Fire TV Stick, for Chromecast, for TV Box and for Smart TV, that is the most used devices to enjoy streaming video streams in the living room or any other room in the house.

How to create a VPN on streaming device

In order to effectively replicate all the steps described, we will first have to recover some information on the VPN server we intend to use, then configure the dedicated app provided by the VPN service provider.
As a valid alternative we can also integrate the VPN directly from the IPTV list management app, so as to immediately protect the flow as soon as we open the app without having to make further configurations and steps.

The chosen Premium VPN service will always provide you a dedicated app for Android, therefore it can be installed without problems on Fire TV Stick and on TV Box with integrated Android. For example NordVPN allows you to quickly download the app for its service from the Google Play Store or as an APK (useful on Fire TV Stick or TV Box without store). 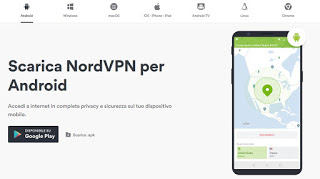 Using the dedicated app it will be very simple to start the VPN on most of the devices indicated below, so as to have protection on all the apps and on all the web services that we start on them (including P2P streams and IPTV).

For IPTV we can use the IPTV Extreme app (Android) to automatically connect behind VPN. If we follow this path we must first retrieve a VPN configuration file (in .ovpn format) from the site of the chosen premium service and upload it later on the IPTV Extreme app, as we will show you in the following chapters.
For example, on the NordVPN service just go to the site of the available servers, press the button Recommended server and, on the page that appears, press on the writing Show available protocols under the indicated server. 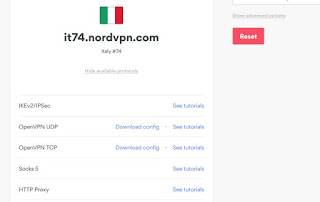 For our purposes we download the file OpenVPN UDPby pressing on the item Download config present next to it.

How to install a VPN on Fire TV Stick

On the Fire TV Stick we can directly install the app of the chosen VPN service by installing it first on our Android smartphone and then using the Apps2Fire app, so that we can comfortably transfer the VPN app quickly. 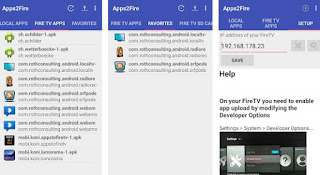 To make the best use of this app transfer method, please read our guide on how Install Android App on Fire Stick TV, from APK or Store.
Once the VPN app is installed, we enter access credentials to the service and choose the fastest server among those present.

Alternatively we can install the IPTV Extreme app on the Fire TV Stick (always using Apps2Fire) and, as soon as we have access to the app on the Amazon device, let's go in the path Menu -> Settings -> OpenVPN settings, press on Manage Open VPN Profiles and then on Add profile. 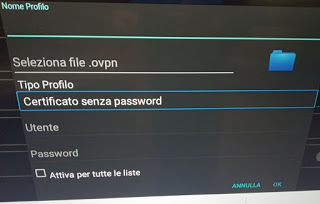 In the window that will open, choose a name to assign to the VPN profile, select the server's .ovpn file by pressing on the folder icon (a file manager will open), choose as profile type Certificate + user + password, enter the login credentials for the VPN service in the appropriate fields, activate the item Activate for all lists and press down on OK.

From now on, the IPTV Extreme app will use the VPN connection every time you log in, without having to configure anything (it does the whole app).
We don't know how to transfer the .ovpn file to the Fire TV Stick? The Apps2Fire app comes in handy, which also has a file manager with which to transfer the files on the smartphone to the internal memory of the Amazon device. 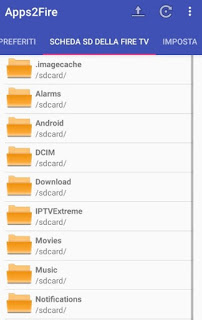 Once you open the tab SD card of the Fire TV, choose the folder Download, press up on the upward arrow symbol and select the previously downloaded .ovpn file.

How to install a VPN on TV Box

Amazon's Fire TV Stick is Android-based, so the steps seen above can be easily replicated too on any TV Box with Android operating system, even the Chinese ones.
If our TV Box has the Google Play Store, we can immediately download the VPN app of the chosen service and protect each app inside the device. 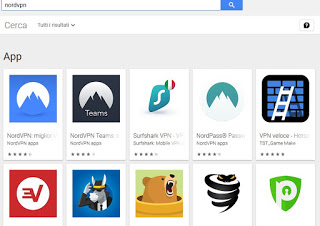 Alternatively we download the IPTV Extreme app (also via APK) and we follow the same steps seen for Fire TV to configure the VPN on this app.
If we do not know how to transfer the .ovpn file to the TV Box, we can use the microSD slot present on many models or use Telegram to transfer the file from the memory of our smartphone to the memory of the TV Box.

How to install a VPN on Chromecast

The Chromecast does not have a real operating system where we can install apps; the only way to be able to use a VPN on Chromecast is to install the now famous IPTV Extreme app on our Android smartphone. Once added to our device, we configure the VPN as seen in the section dedicated to Fire TV (adding an OpenVPN profile), make sure we are connected to the chosen VPN then press the Cast symbol at the top right and select the Chromecast in our possession. 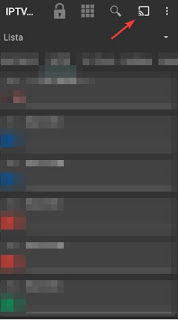 The flow will be managed by the app and sent immediately to the Chromecast but will arrive encrypted and protected by the VPN. To learn more about the use of the Chromecast, we invite you to read our Chromecast guide with 16 tricks and applications to use it at its best.

How to install a VPN on Smart TV

If we own a TV with Android TV official (so let's not talk about cheap TVs with custom Android), we can download both the VPN service app and the IPTV Extreme app, as the apps are perfectly compatible. 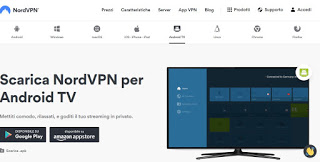 If, on the other hand, we have an LG, Samsung or other Smart TV with a customized operating system, we cannot directly install the apps indicated so far, but we will necessarily have to get an Android TV Box or a Fire TV Stick in order to apply a VPN.

Do we not want to add other devices and do we want to suffice the IPTV services already present on the chosen Smart TV? In this case we can protect the Smart TV by starting any PC with Windows 10 (and Wi-Fi module) and downloading the dedicated app of the chosen VPN service (for example NordVPN for Windows). 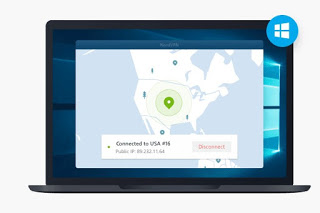 Once the VPN is activated from the app, we press on the bottom left of the Start menu, we open the app Settings, go to the Network and Internet menu then press on Mobile hotspot. 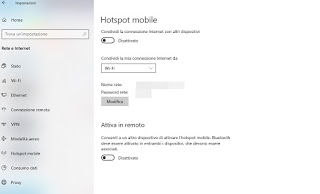 We choose a new name and password for the network (by pressing the button Edit), then activate the switch at the top of the page to activate the Windows hotspot (to which we will connect the Smart TV).
To protect the hotspot with the VPN, press on the top right corner Change card options, right click on the connection created by the VPN (it will be called TAP flanked by the name of the chosen VPN service), click on Property, let's go to the card Sharing, activate both check boxes and choose from the list Home network connection, the voice Local Area Connection (LAN) * 10. 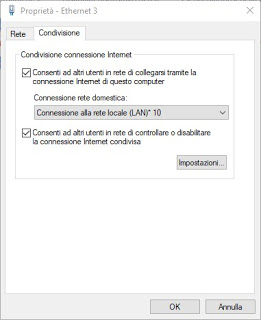 We press on OK and close all the windows.
We now connect the Smart TV to the Hospot Wi-Fi network created by the PC, so that we can benefit from the shared VPN connection.

Installing a VPN for the main streaming devices on the market is relatively simple, just get the right app for every need and immediately start surfing anonymously, hiding our original IP and moving from one country to another without problems.

Do we want to create a VPN to play with our friends as if we were all in the same room? We advise you to read our guide on how Create a VPN to play online by simulating a LAN.
If instead we want to obtain a high level of privacy, we continue reading in our guides Configure VPN on Router is Surf the internet anonymously with proxy, vpn and fake IP address.

What does FWA mean, the alternative to fiber for fast Internet

Best Speed ​​Tests and how to use them

Harder games with challenging levels on Android and iPhone

How to find the keys with a portable Bluetooth locator keychain