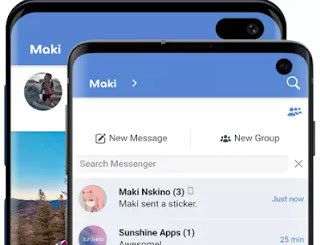 For some time, for more commercial reasons than for actual usefulness, Facebook has separated its applications from the net, so whoever owns an Android smartphone or an iPhone, to send and receive private messages or chat with Facebook friends is forced to install the other application, Facebook Messenger. This forced double installation can be a problem for those who have an Android smartphone or an iPhone with limited memory since Facebook and Facebook Messenger together can occupy more than 200MB of memory.
If you do not want to install both applications to have all the Facebook functions, then to publish posts, view photos and even chat with friends, you can install a new app (for Android) unofficial testing a reunite Facebook and Messenger together.

Maki Plus for Android it is a rather recent 2 Euro app that aims to unify Facebook and Messenger so as to make the installation of official apps superfluous. While it may still have some failures, it still covers all the main features, including notifications and even audio and video calls. It also includes special features such as the ability to download videos from Facebook and also to use multiple Facebook accounts together.
The app, which also allows you to connect to Twitter and Instagram accounts, currently seems to be the best of its kind and can also be downloaded for free in its version Maki Lite

Looking for alternatives, the other apps that allow you to connect to Messenger and Facebook together I’m:
– Metal, which simply uses Facebook and Chat Messenger websites as a browser would do, with the possibility of receiving notifications.
– Swipe for Facebook, similar to Maki Plus, an app that works well in its paid version, which removes otherwise annoying advertisements.
– SlimSocial, a very light client for Facebook that uses the mobile version of the site and also integrates Messenger chat, without advertising and free.
– Facebook Lite, the official app for Android, integrates the chat inside

If you do not want to install Facebook Messenger but still maintain access to the Facebook chat with a lighter app you can always use the app Messenger Lite, clearly lighter and more essential.
As an alternative app to Messenger, there is also the experimental app DISA that unifies Facebook Messenger, Whatsapp, and SMS in a single Android app.