Home Network What are packet loss, latency and jitter and how to fix them

How to understand, control and resolve network problems such as latency, lost packets, and jitter to minimize small network outages. 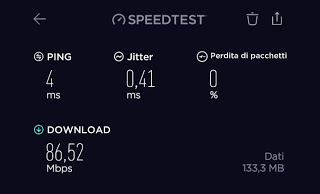 There is nothing more annoying than interruptions in streaming movies, jerky viewing in video calls, or delay in online games. What is most frustrating is the fact that this can also happen in the presence of a super-fast fiber connection, which should guarantee uninterrupted data transmission. If this problem occurs frequently, the cause is related to small network problems that depend on the quality of the internet connection: Jitter, packet loss, and network latency. These types of problems can be solved at home or, at the very least, minimized to the maximum.

To understand what is meant by “package” in the transmission of data in computer networks you can make a metaphor thinking that a single email is like a convoy of buses to take the classes of a school on a trip: each bus is a package that brings a part of the students and information on where it is going, where it comes from and who is driving (source IP address, destination IP address, packet type, packet number).
Networks essentially break email and all other data into packets that run fast from one part of the world to another. When all the packets reach their destination, they are downloaded to recreate the email message.
The convoy of packages (we always think of buses) does not go through a single linear road but takes the fastest route passing through several junctions (we think of roads that cross small cities). As can be the case on normal city streets, a package can encounter roadblocks or traffic jams that prevent it from reaching its destination. To avoid total interruption (for example of a film we are watching), the packets are retransmitted with the result, however, of a delay during playback or surfing the web that may seem slower. When a packet reaches its destination too late, in some cases, it is discarded.

The loss of packets is not only linked to the congestion of the network (on which we cannot do anything), but it also depends on other factors:

This means network latency and difference with the jitter

The jitter (network jitter) occurs when the delay time (in ms) in data packet transmissions starts to vary.
Latency (or delay) is instead the time it takes for packets to go from one point to another which must be kept to a minimum.
For example, suppose we have about 2 ms as the latency of a packet. Jitter is when multiple packets have very different latency values. This phenomenon is undesirable in networks and telecommunications because it can disrupt the proper functioning of the connection and cause packet loss. Understanding the causes of these variations can help you avoid or minimize them more effectively.

The main causes of network jitter are related to the malfunction of a router, network congestion, and the presence of multiple devices within a network, that is, if we have many computers, smartphones, or smart accessories in a network.
Packages with the shortest route (fewest jumps) will surely be delivered before packages that have taken the longest routes. Therefore, each packet will take a different time to be delivered (eg one packet is sent in 10 ms, another takes 40 ms to reach its destination, and so on). This variation in latency is jitter.

How to check latency, jitter and packets lost in the network connection

There are two ways to check the connection quality, latency, lost packets, and the Jitter problem. You can use a speed test or the Ping tool. Both checks can be done on both Windows and Mac and Linux.

Do the Network Speedtest

there are several tools to check the internet connection speed and in this case, we use Speedtest By Okla which can be used online or as an app for Windows 10.
Once tested using the app, press on the results history to see the details and read Ping values ​​in ms (network latency), Jitter, and the number of packets lost.
It is also possible to test the network with other specialized software solutions, such as PRTG Network Monitor, more detailed though less simple.

Use Ping on PC

If we use a Mac or a Linux computer, we can use the Terminal app while on a Windows PC, we can open a command prompt window (in Windows 10 press the right mouse button on the Start menu to find it).
In any case, write the command ipconfig to find the IP of the Gateway (i.e. the router). Then run the command:
ping 192.168.1.1 -n 30
to change 192.168.1.1 with the gateway address.
Also, try to do:
ping google.it -n 30
Duration is the time it takes for a package to arrive at its destination. If in the transmission of the various packets, the times should be very variable, it means that there is the problem of Jitter.
In the ping results, packet loss should always be zero.
If you are curious about it how many jumps does a package to go from our computer to google.it, try the command:
tracert google.it

How does packet loss, high latency, or jitter work?

In most cases, the problems that cause packet loss do not depend on our connection, but it is still possible to make sure that, for our part, they are minimized to the maximum. These are the recommendations that I feel like giving:

Access PCs and see shared folders of other computers