Home Android What is Android System WebView used for and can it be removed? 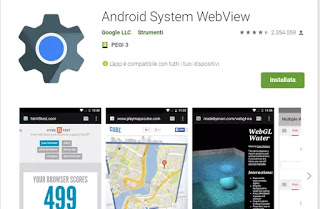 To make Android easier to update and keep secure on all phones, Google has removed some of its critical parts, making them applications that update automatically from the Google Play Store.
We have seen, for example, what the Google Play Services app is for, without which it would not be possible to use any Google app.
Another mysterious application present in many Android smartphones is the one called Android System WebView, which is updated very often and that appears in the card on the Play Store with a somewhat vague description: “system component with Chrome technology that allows Android apps to show web content …“.This application comes pre-installed in many models of Android smartphones, but as it remains hidden (starting from Android Nougat) and cannot be used directly, that is it is not possible to find it in the list of applications and it cannot be started as you would with Chrome or other browsers, one might ask what it does and if it were possible to uninstall it and remove it in case you need memory space.

In general, the app “Android System Webview” must be maintained, even if it does not seem to do anything special.

WebView is basically a web browser, which however does not live its own life, but relies on other apps.
The purpose and the reason why this Android System WebView application exists is to provide a browser for applications.
In other words, when on an app like Facebook (even if Facebook also has its internal browser if in the settings you disable the option to open links to the outside) you tap to open an external link (for example an article by How2do ), the system can use the System WebView web page viewer in the same app that you are using without opening it in Chrome or Firefox.
In practice, it is a mini-browser that is based on Chrome, with all the features of a browser including the history, the functions to zoom in and out, the search for text and so on.
If there were no Android System WebView, every link that opens from an application like Facebook would open on the default browser (for example Chrome) and then when you want to return to Facebook, you should close the browser.
To simplify this process, the System WebView allows instead of open the links inside the app itself, with a button to quickly return to the app.

Android System WebView is, therefore, a hidden app that does not require any configuration, which is automatically used by the apps that support it and runs in the background.
It should be noted that not all apps support WebView, so links are sometimes opened in the default browser anyway.
In some cases, then, apps can have their own web page viewer and ignore any browser.

Can I safely remove the Android System WebView?

Although as an app it remains so hidden that it doesn’t create any problems, you can definitely uninstall System WebView as you would any other application.
On Android versions lower than Android Nougat, you can only uninstall the updates and not remove the entire app.
In Android Nougat and later versions, instead, Google uses Chrome as a Webview app, so it can be safely removed.
One reason for not removing it may be that WebView is slightly faster to open than Chrome.
To remove it, go to the Google Play Store, search for Android System WebView and then press the button that uninstalls the application.

So if you use a phone with Android Nougat or later, you can safely remove it, while if the Android version is older, then you have to leave it as it is.
Finally, keep in mind that if Chrome had been deactivated because you want to use another browser, then you should definitely keep the Android System Webview app active.

Which portable printer to buy for smartphones and PCs

What connection speeds are available in Italy from the providers