Home iPhone What works best on iPhone than on Android 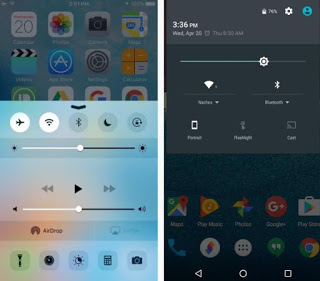 After seeing the reasons why those who use Android consider it superior to the iPhone, still talking about the operating system, we now see the opposite position, that is what Android users envy to the iPhone.
Because it’s not all a bed of roses on an Android smartphone, perfection is far from being achieved and, for sure, it’s not that the iPhone is junk indeed.
As a longtime Android user and as the owner of an iPhone more for reasons of experimentation than actual use, I now go on to analyze the best features of the iPhone and its iOS system, those that for an iPhone user are distinctive features and superiority compared to any other Android smartphone phone.
As in the other article, even here we will see a comparison that is based on obvious differences only after some parallel use.
I refer to the article on the differences between Android and iOS for a more general discussion.1) Not perfect unlock screen on Android

On the iPhone, when the screen is locked, it can be unlocked by immediately entering the PIN.
In ultimate versions of Android instead, it is first necessary to make a movement with your finger and then unlock it with a double job rather boring.
moreover, on the iPhone, when a new PIN is set, the operating system requires it to be four or six digits than just write the numbers and automatically unlock it.
On Android instead, the use of the PIN is bad because there is no limit to the numbers to be used so it is necessary to confirm it by pressing Enter, making the release even slower.
Fortunately, there are, in Android, the unlock mode with sequence and the smart lock (READ ALSO: Which blocking protection is more effective on Android)

2) Switching between apps easier on the iPhone

The phones are designed to be used mainly in portrait mode so Apple has made sure that the recent app switcher makes them scroll horizontally.
On Android, instead, recent applications scroll vertically, thus taking up little space for previews, making it more difficult to locate the app you want to use and making it much more inconvenient to move with your finger.

The Android quick settings and the Control Center on iOS are virtually identical in terms of functionality.
The only difference is that iOS allows you to quickly launch applications like the compass, the calculator, the flashlight and the camera, while on Android there is only the torch and nothing else.
It is true that for Android there are numerous apps to launch applications quickly.

The reason why many people say that the iPhone is easier than Android depends on the fact that nobody in the world is as good as Apple in knowing how to advertise the best features of its products.
Who has an iPhone has more ease of knowing what an iPhone does than an Android user who instead remains without any information or guidance from Google, Samsung or any other manufacturer.
In essence, the names of the apps on the iPhone are very clear and you can’t go wrong, while on Android they are a bit strange.
Just think of the Apple Store, very clear and of Play Store that you need to know is the Android store and that on some smartphones is confused with other stores like the Samsung Store.
Not to mention the name Hangouts compared to the name Facetime for the video call app or the name Messenger (the Google app to send text messages) which merges with Facebook Messenger, compared to iMessage.

All iPhone owners know when their smartphone is updated to a new version of iOS and time a week, all iPhones in the world are updated.
When Google presents a new version of Android, only Google Nexus smartphones are updated right away as months go by before it shows up on smartphones like Samsung, LG, HTC, Huawei.
In addition, Apple continues to update older old iPhone models up to five years earlier, while Google stops (officially) after just three years.

6) Big screen mode on the iPhone is missing on Android

On the iPhone, just touch the home button twice to narrow the screen and enter the one-hand mode.
In Android, this possibility is missing, except on some smartphones like Asus Zenfone and Samsung Galaxy.

Apple is the company that brought iPods into the world, so it’s no surprise that the iPhone is also very convenient for listening to music with headphones or attached to a speaker.
Instead, you need to install an app to hear and manage music on Android if you wanted something similar.

8) The apps come out first because Apple encourages more developers

Application developers always prefer to publish apps first on iOS and then on Android.
There are basically three reasons: first of all, iPhone users spend much more money on apps than Android users do.
Secondly, since there are very many models of Android phones and tablets of very different sizes, more work is required for developers in trying and adapting apps to various types of devices.
Finally, there is also to say that the programming language of the iOS apps is more modern and flexible than that used in the Android apps (probably due to the fact that Google is in dispute with Oracle for the use of Java in Android).

Ultimately, what I have to say after this article and the previous one about why Android is better than iOS, is that there is still plenty of room for improvement for both and, at the same time, that today smartphones of every brand and model are all very similar to each other, except for a few decisive differences only if consolidated habits have to change.
Having said that, I still prefer the freedom that Android offers in personalizing the phone deep down, but I realize that this thing, for many people, does not matter.

If mouse and keyboard don't work, solutions on Windows 10

How to see if a number exists and is on Whatsapp

How to use SSH