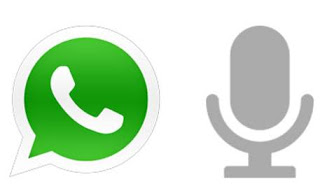 Whatsapp gives the possibility to send audio messages quickly and easily, using the microphone button.
These audio messages can, therefore, be heard by those who receive them and are very comfortable when we are in the car or when we cannot write by hand on the keyboard.
Whatsapp voice messages, However, occupy memory on the phone as an audio file and then it is not said that the recipient can listen to them if he is in a place where he cannot turn up the phone volume.
Here then is the possibility of dictate messages by voice, so making sure they are received as written with the keyboard.So first of all, let’s talk about the Whatsapp audio messages.
While we know how to send them and how to listen to them, what can interest us is knowing where they are saved so that they can be recovered or deleted.
The WhatsApp audio notes, in fact, they are saved on the phone occupying space permanently, without the possibility of being able to listen to them without Whatsapp or to delete them.
The only way to remove them is to use an Android file manager.
Using, for example, Solid Explorer or ES File Manager, the folder to locate to find all Whatsapp voice messages is:
Whatsapp / Media / Whatsapp Voice Notes

In this folder, you will find many other folders each named with a number, which is then the year-month date in which the voice messages were saved.
Within each of these folders, there are files .opus, which cannot be heard as normal audio files.
The only way to recognize what these vocal notes are is to check the date and then catch them in the chats where they were received.
To clean up and recover space on every Android smartphone, you can delete all the folders inside Whatsapp Voice Notes.

IMPORTANT NOTE: For those concerned about the privacy of Whatsapp’s voice messages, there is a trick that few know.
If you want to listen to a voice message, not in handsfree mode, just press the Play button of the message and then bring the phone to your ear like you would when you are on the phone, immediately the sound of the smartphone speaker turns off and you can listen to the message without letting everyone hear.

Alternatively, you can also convert Whatsapp voice messages to read the text.

Other than voice messages, written messages are dictated by voice.
In this case, you write a message as if it were typed by hand from the keyboard, even if it was actually created vocally.
Both on Android and on iPhone, you can dictate a voice message, open the keyboard as if to write and press the microphone button here (not the Whatsapp microphone button, but the keyboard key).
Just say the message to dictate it in WhatsApp and press the key to Send.

If, instead, we can’t use our hands because we’re in the car, on iPhone you can dictate a message to VOC and activating Siri’s voice commands.
Then call Siri saying “hey Siri”, then say the words Send WhatsApp message, then say the name of the recipient and finally dictate the message to write and send.

On Android, you can dictate a message to Whatsapp using the Ok Google voice command, which is similar to Siri.
After activating Ok Google, say “send Whatsapp message“, then the recipient’s name and message to write and send.

READ ALSO: Write and send messages on Whatsapp in 11 ways