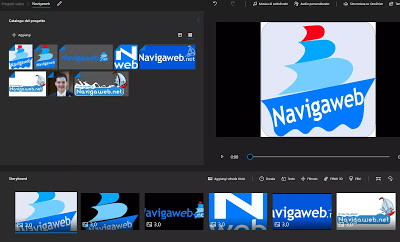 When some time ago, Microsoft decided to end the development of Windows Movie Maker, which for years was one of the best free video creation programs, many people still continued to use it (you can still download and use Windows Movie Maker), waiting for an equally valid and easy-to-use alternative to come out. That official alternative then arrived in Windows 10, as an app integrated into the system, which after several updates and name changes became the end Video Editor, a very valid and satisfying application that coexists within the app Photo.

To open Video Editor in a windows 10 PC you can search for words Video Editor from the Start menu or from the search box on the taskbar. You can also open the Video Editor by launching the Photos application directly, but in this case, when the application opens, you need to click on top Video Projects to enter the Video Editor.
After opening the video editor, you can create a new video by pressing the button at the top right. You can then choose a new video project, use the automatic video option or load an already started project. Given the name of the new project, you can start to create it and modify it in different ways.

What you can do with the Windows 10 Video Editor

Going to discover the Windows 10 Video Editor functions and by learning to use the various customization and video creation options, we can conclude that this app is better than the old Windows Movie Maker, even easier to use, faster and immediate.

The first thing we can do in the create a new video is that of add videos and images to the time sequence by dragging the selection or using the button add. The creation interface is really the easiest that you can have in an app of this type, with few options and well defined and clear buttons in their function. Videos and photos that you want to add can be dragged from a folder and released in the section of the Catalog, where the key is add.
All videos and images added to the catalog can then be dragged onto Storyboard at the bottom of the window. The Storyboard is the temporal sequence, so you can move the various elements to choose which ones to display first and which ones after, doing a montage operation. In the temporal sequence it is also possible to divide the videos, adjust the duration of the images display, speed up the videos, remove the black bars, insert writings and various effects.

2) Insert the title cards in the videos

In addition to adding text directly to videos in the Storyboard, the app also allows you to insert cards with title, ie images with a uniform background and large writing, displayed in full screen for the length of time you choose. For the title card you can choose the background color and the font used for the writing.
Once a card is created Title pressing the relevant button, this is added to the Storyboard and can be moved and modified as you can with any other image added.

In Video Editor, various options are available to adjust the appearance of text and written additions in a video and for titles. Pressing the button Text in the Storyboard you can change the character and then the position of the writing.

What was perhaps the best feature of Windows Movie Maker was also added in the Windows 10 Video Editor, where each video added to the Storyboard can be cut or split into several parts. By selecting a video in the timeline, you can then press one of the two buttons Divide or Cut it to open the work interface, with a cursor that allows you to choose which part of the video to keep and which to delete or to divide it into several parts. The cut or split videos are immediately added to the Storyboard.

If you have videos with the wrong orientation, you can easily rotate them with the Windows 10 app; just select the video and then click the button Wheel (it is an icon on the right side, near the trash can button) to rotate it clockwise until the desired orientation is reached. Pressing Rotate 4 times, the video returns to the initial orientation.

6) Duration of display of an image or a title

Images and title cards added to a video project have a default display duration of 3 seconds. If you want them to be displayed for more or less time, select the image and then click on the button Duration to choose how long it is displayed before moving on to the next one. With this option it is possible to create more or less fast slideshows of images.

For each video or image added to the Storyboard and selected, you can press the button filters add a filter that changes colors. Among the filters we have those to transform images into black and white or to blur them or for Sepia, Love, Energy and many others.

8) Motion effects to images and videos

To make the video you create with Video Editor special, you can press the button Footage located above the Storyboard. This button allows you to add movement to videos and images so that they do not remain in their position during viewing. For example, images may slide slowly up or down. For the various added movements it is possible to control the type of movement and the direction.

Only on the videos it is possible to add specials and originals 3D effects using the relevant button on the Storyboard. These 3D effects add animations over the videos like explosions, balloons, autumn leaves, bubbles, confetti, snow and more. The interface for adding 3D effects shows, for the first time, a guided tutorial to learn how to position the effect and modify it as you prefer.

10) Add music in the background

To create different versions of the same video you are creating, you can press top right on the button with three dots and then choose Video duplicate to make a copy of the project to give another name.

Any video project not yet completed can be saved on Onedrive so that we can still work with another Windows 10 computer. syncs to Onedrive is at the top right and allows you to automatically upload the project to the cloud, to find it on all Windows 10 PCs that are accessed with the same Microsoft account.

13) Save the video or project

Video projects are saved automatically, but you can also export a project by creating a backup to keep on disk or on a USB drive. To do this, just press the button with three dots and then the Backup which saves the project as it is, along with all the videos and images added to the catalog.
To save the videoinstead, you can press on the button End the video which allows you to choose the quality and the folder in which to save it.

Connect 2 PCs in wifi to share internet or files