Home Android With Android 9 Pie the smartphone is smarter and adapts to the... 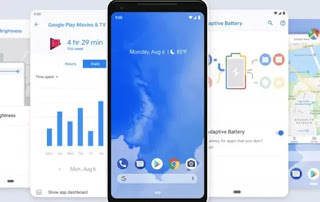 Version 9 of Android was therefore released, for now in beta, with the name of Android Pie.
Android Pie, according to Google’s words, comes with a very powerful integrated artificial intelligence which allows rendering every smartphone smarter, simpler and more personalized.
As usual, when talking about the release of a new Android version, the update will initially be available only for phones sold by Google, namely the Pixel 2 and the Pixel 1, going slowly to be distributed on smartphones of other brands.
This year, however, the expectation for Android 9 may not be as slow as in previous years, thanks to the ready preparation of some of the most popular Android phones.
Pie introduces several new features on phones that will surely be appreciated by those who want a smartphone that fits the person and in this article we see what are the most important innovations and features of what the future of every new Android phone will be.

Android 9 it can, therefore, install already today on Google Pixel and Google Pixel 2 phones, in normal or XL version, by downloading the system on the PC from the Android site and then proceeding with the manual update.
Who has the following smartphones will be able to receive Android 9 Pie as an update within a few weeks:
– Essential Phone
– Nokia 7 Plus
– OnePlus 6
– Oppo R15 Pro
– Sony Xperia XZ2
– Vivo X21
– Vivo X21UD
– Xiaomi Mi Mix 2S
For the other smartphones, we will have to wait for the development of the producers who will have to adapt Android 9 to the various models and release each of their versions.

The most interesting features introduced by Android 9 and the most important changes of Pie that they become the most intelligent and adaptive phone compared Android 8 Oreo are:

Although Google has improved the efficiency of Android in past versions with energy-saving mode, battery life remains the biggest concern for people.
Android 9 Pie, therefore, introduces a new function called “Adaptive Battery”, which uses automatic learning to know which are the most used apps, assigning them the priority for the battery.
Based on the use of an app, a certain priority is assigned so that the system can limit the device resources available for each app based on this criterion.

2) Adaptive brightness with AI power supply
Android 9 Pie has a new AI auto-brightness algorithm, which learns how each user wants to set the screen brightness.

The greatest improvement of Android Pie compared to Oreo is its ability to help do things with as few touches as possible. And nowhere is it more evident than with app actions.
Android Pie has a new feature called App Actions that helps users do things faster by predicting what they want to do based on context, showing that they act directly on their smartphone.
For example, if the system knows that on Tuesday morning you go to work at a certain time, actions such as starting the navigator and taking charge of appointments will be suggested.
You can also add app actions to the quick notification bar links, which then becomes even more customizable.

This is an important feature added to Android Pie that allows apps to show a portion (slice) of information from other apps when the operating system believes we may need it.

Every new version of Android tends to make some changes that in Pie improve in various ways.
When you reply to a message or an email from an alert you will find the suggested answers to choose from in addition to the writing field.
You can long-press on an alert to stop future notifications.
Apps can be closed by tapping the notification.
If you constantly delete a certain type of notification, Android Pie will ask you to stop viewing.
Under certain notifications, you can touch a “Useful” or “Not useful” button so that the system can learn to display only the ones you want.

In addition to these functions, Google has also introduced the new system navigation based on gestures in Android Pie which includes a single home button, intelligent text selection, and gestural navigation.
There are a few tricks to quickly send messages to the unanswered phone, to select and paste the text into the images and to turn the screen even if the orientation change is blocked, by pressing a button.
Support for connecting up to 5 Bluetooth devices simultaneously is also included.
You can see the list of open apps by swiping your finger up the screen, while with a horizontal swipe you will see the most used apps, to quickly recall them.

How to create guest network on Wi-Fi router