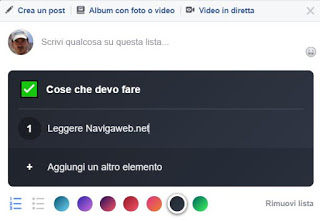 By now you can publish almost any kind of thing on Facebook, you started from simple status updates and photos and then get to live videos, colorful posts and more recently also create polls on Facebook.
From today it is also possible to write lists and lists, which will not be anything special but helps capture attention and put order into a long post.
The option to create lists allows you to choose a colored background and create a numbered list or bulleted or numbered lists.With these lists, you can share personal information on Facebook like the ranking of favorite movies, the favorite foods, the songs we listen to these days and what we want.

To create a list or list as a Facebook status you simply have to press to write a new status, scroll through the various options that appear under the box and choose one of the Lists.
Facebook, therefore, suggests some ideas for lists, including, for example:
– Things to do
– Favorite songs
– Most friendly friends
– The things that make me laugh the most
– Worst habits
– Good resolutions for the year
– Favorite foods
– Favorite movies
– Favorite Quotes
– List of things to do before you die
– Things we hate
– People I thank

If you want to create a custom list other than those suggested by Facebook, you can use the first option, the one in the list “Create a list with your title“.
After choosing the title, you can add the various items in the list, set it as numbered or bulleted and then choose the background color.

Banned from Facebook and deleted accounts for no reason: how to fix it

If a virus is not eliminated from your pc, How to remove it