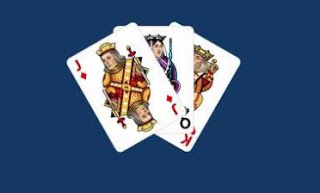 Solitaire is not only one of the oldest card games, but also one of the oldest computer games, so much so that since the first versions of Windows (from Windows 3.0 in 1990), Microsoft has always included a collection of solitaires, which they became the first game to try.
The “Microsoft Solitaire Collection” has become one of the most played multiplayer games on Windows 10.
Given the extraordinary success, the collection of solitaire Microsoft has now also been released for Android smartphones and tablets as well as for iPhone and iPad, becoming one new alternative for solitaire enthusiasts, who certainly do not miss the apps to challenge and challenge each other.
In addition to the solitaires offered by Microsoft, there is also other solitary to install, so you never stop having fun.
Let’s see together the best solitaire free which we can install on our mobile device.

The Microsoft Solitaire can be downloaded for Android and iOS for free and also includes a premium subscription plan to remove advertising.
The game collection includes 5 solitaire games:
– Klondike, the most classic solitaire, where we start with several columns of cards to be grouped in the numerical sequence.
– Spider, the solitaire with eight columns, where the stairs must be ordered in descending order from the King to the Ace in the least possible number of moves.
– Freecell, strategic game with four cells including moving the cards to form a scale for a card suit, grouping them in the boxes at the top of the screen.
– Tripeaks, where the cards arranged in three small pyramids must be eliminated.
– Pyramid, where instead the picture of cards is formed by a single large pyramid.

The games allow you to play alone (as good solitaires!) But they also offer the possibility of accessing the online platform through the Microsoft account to challenge friends or other people in the world, so as to see who is better at solitaire games.
Do we want to play these solitaire games even from a PC?
Just download the same application on the Microsoft Store for Windows 10 as you can for smartphones and tablets -> Microsoft Solitaire Collection for PC.

We open this link from a browser, so we click on Get to add it as a Modern app to the Start menu.
At the end of the download, we will be able to play the games seen above on the PC too, so as to have fun and challenge friends at any time.

2) Other solitaire games for smartphones and tablets

While that of Microsoft is the most famous solitaire collection and perhaps the best for smartphones and tablets, those who simply want to play with the cards on the smartphone or tablet screen without having to register with a Microsoft account, can choose other very beautiful games apps, able to convey the same emotions as the live solitaire or the one offered by Microsoft.
For convenience we will divide the solitaires by operating system, so you can immediately download the game that interests us based on the device in use.

The best solitaire games for Android I am, therefore:

– Simple Solitaire Collection: a collection of all the most famous solitaires, in a simple and immediate graphic. This stands out in a particular total absence of advertising, so you can play without any hassle.
– MobilityWare Solitaire, downloaded by more than one hundred million people, available both on Android.
So there are different versions of Klondike, different games proposed every day, Spider and Freecell and then also world rankings, multiplayer challenges with friends, statistics and much more.
– Solitaire! by TaoGames for Android, it is an excellent Klondike solitaire with background music, beautiful graphics, daily challenges and in any case without advertising or disturbances of any kind.
– Classic Solitaire; another good app to play the classic solitaire, with a considerable degree of difficulty (useful for those looking for real challenges).
– Solitaire by Brainium! for Android is another of the most popular solitaire games of the whole store for its graphics and its playability that makes it really seem to touch the cards.
– Solitaire Card Games: another good collection of solitaries of all types, with the possibility of customizing the background and the cards.
– Spider Solitaire Card Games: good game app for those looking for a challenging challenge in the Spider variant of the solitaire.

If we are looking for the best solitaires for iPhone and iPad, we can install:

– the Solitaire for iPhone is the classic Klondike, again with multiplayer challenges and world rankings.
– Solitaire by Finger Arts: one of the most beautiful solitaire games for iPhone, with the possibility of making daily challenges (of increasing difficulty) and always choosing the most appropriate level of difficulty for our abilities.
– MobilityWare Solitaire, downloaded by over one hundred million people, also available on the iPhone and iPad.
– Solitaire by Brainium!, in fact, the same app we saw for Android is also available for iPhone.
– The solitaire by OutOfTheBit Ltd: another valid app to play solitaire on our iPhone or iPad, with simple and accurate graphics.

3) The solitaire on Google
A trick that few people know, but easy to find is that of the card solitaire playable directly on the pages of the Google search engine.
Just search for the word “solitaire” and then open the classic card solitaire, with the possibility of choosing the easy or difficult level.
The solitaire, playable from PC and smartphone, remembers scores, moves and playing time.

4) Other games for smartphones and tablets

If we are lovers of casual games or games in which skill is required but we want to try something different from the solitaires, we advise you to read the collection of guides we have created on the theme of cards, board games and board games that can be used on smartphones and tablet.

Do we want to challenge friends on Facebook?
In this case, we can also not install any app or program, since the most famous social network in the world offers a wide range of online games, including solitaire games.
For further information, we can read the guide below.

How to control the router remotely

How to see all Facebook posts on a page

How to delete contacts in WhatsApp

How to publish censored photos

How to search for people on Facebook without being registered