Home Android Customize Android on the home screen and apps 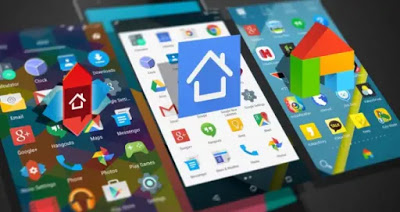 Every smartphone with an Android system offers the freedom to change the look of everything, especially with regards to the main screen or home screen.
Android, compared to iOS on the iPhone, is not blocked with the usual grid of icons, but it really can customize not only colors and backgrounds, but also the way in which the icons appear, the layout, the home design with the ability to also make the screen interactive.
We can add widgets, we can add search bars and quick gestures, we can have empty spaces where we want and if we don’t like the way our Home screens appear with the launcher provided by the phone, we can also abandon it and use a different launcher, opening us to new worlds of personalization and new themes to use, all without any difficulty.

In this article, we see the best ways to customize Android on any Samsung, Huawei, Xiaomi or any other smartphone and to know how to change almost everything of the initial appearance of the home screen and other apps.

You can customize Android by changing the background on the main screen and using images that scroll along with the icon screen.
In addition to the fixed and sliding backgrounds, there are also animated backgrounds with images in continuous motion or that come alive when you touch with your finger.
Each phone or tablet comes with a selection of wallpapers: images for the home screen or lock screen backgrounds.
You can change wallpapers in many ways on Android, perhaps by installing a launcher like Microsoft Launcher, which allows you to change the wallpaper automatically every day or with dedicated apps like Google Wallpapers where you can find many images divided into categories.
To set a new wallpaper and use, for example, a photo, just long press on an empty space on the Home screen.

While in an iPhone the Home screen is made up of icons arranged in a grid and four buttons at the bottom for your favorite applications, on Android you can choose an infinite variety of layouts.
The app we use to organize and launch apps on an Android smartphone is called a launcher and each phone contains a default one.
Most launchers have different types of home screens with app icons, a dock to keep the most used apps always visible and a button to open the app list.
On the main screen, you can move the icons as you want, add and remove widgets like the clock or the weather, create icon folders by dragging one on the other.
Some launchers, then, allow you to change the size of the icons and widgets in the initial screens to adapt them to the available space and to add or remove screens.
The most modern launchers allow you to switch from one to the other by importing the layouts, so as to keep the preferred one and not start all over again.

In another article, we saw the best Android launcher free to use, including the aforementioned Microsoft Launcher, the most advanced and customizable Nova Launcher or some more minimal.
There are also launchers that make the start screen look like an Android phone identical to an iPhone.

Button icons for launching apps can be changed, on any Android smartphone, by launcher or display settings.
If the option is not found, you can change launcher with one that allows you to change icons.
We made a selection, in another post, of the best icon packages that contain the buttons of almost all the main apps, with different designs just to choose, for free.
You can also add site icons to the Home screen, to launch them quickly.

Another way to liven up the home screen of an Android smartphone is to add a widget or two that not only graphically change the appearance, but can also add interactive features in the form of buttons to press, switches or dynamic information that changes.
Just think, for example, of the widget with time and weather that shows the big clock and the weather forecast without having to open any apps.
The widget with music playback controls lets you change songs to listen directly from the main screen, pause it or start again without opening the app.
Most apps for listening to music on Android include a widget or two for the main screen, but there are even more flexible music widgets if you prefer.
In the list of the best widgets, there are also the ones to take notes, to see the calendar of appointments, to activate or deactivate phone functions and many others.

The keyboard that appears every time you need to write a message is an app that can be changed from the default and installed on the phone.
The most popular writing app on Android is definitely the Google GBoard which has in its settings, the options to change color and theme as well as customize every aspect and key of the keyboard also changing writing mode.
Among the best keyboards for Android, there is also SwiftKey from Microsoft, which can be customized in a very deep way in colors and themes.

In the Audio settings of Android, you can choose the ringtone of the call ring, message notifications, and each app.
Each smartphone comes with a set of predefined music and sounds to choose from, which change from brand to brand.
With the apps to download and change ringtones on Android like Zedge, everything becomes simpler and freer, with the ability to put songs, music, and melodies of all kinds.
As seen there are also free ringtones as a classic phone ring, for those who don’t want to hear music.

Even the screen lock screen on Android can be customized in various ways, not only using different backgrounds but also blocking methods and widgets that can be added to see some information on the screen without needing to unlock it.
You can decide, in the Android security settings, the style of the lock screen, the lock method to use, whether or not to show notifications and the text to be displayed.
Also, through some Android lock screen apps, you can add widgets and notifications.

Among the possible customizations on Android, there are other apps that can be changed, with different graphics from the usual one.
For example, the Phone applications change the graphics of the call keypad and also that of the keys to answer.
The app for SMS messages on Android can be changed, as well as the address book, the email app and the calendar app just to give some examples.
If you want, you can even customize Whatsapp with different backgrounds in chats.

Although this could invalidate the warranty, nothing prevents you from radically changing the Android system by installing a different version.
Android is an open-source system so there are many versions, even better than the one on the smartphone just bought.
After unlocking the Android bootloader you can then install a different version or ROM of the operating system, completely changing the phone.
This way, if it didn’t work too well for applications pre-installed by the manufacturer or for other reasons or if the phone no longer receives system updates, you can renew it with a new ROM.
In another article, the best Android custom ROMs are listed, although for each model there are specifications and it is possible that they are different from the most popular ones.

Finally, in another article, 30 apps to improve Android, modify and customize the system.