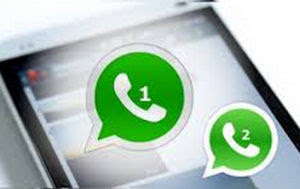 On a dual-sim smartphone can you use two separate Whatsapp accounts?
The answer is no, because Whatsapp allows you to use only one account on each cell phone and no more, unless you use a trick a bit elaborate that allows you to use two or more accounts on Android smartphones, whether they are dual-sim or not.
There are two ways to make Whatsapp work with two accounts and two numbers on an Android phone, each with pros and cons to consider before doing everything.

READ ALSO: Join Facebook, SMS, and Whatsapp in a single chat with Disa

UPDATE 2018: A second Whatsapp account can be added to any phone using the Whatsapp Business app.

1) The first method requires the installation of an app called OG Whatsapp which is not present in the Google Play store.
This application is a modified version of Whatsapp, a bit like that Whatsapp Plus that we have recommended in another article not to download due to security problems.
However, having confidence in the developer and if there are no alternatives (because as we shall see the second method has an important requirement), then you can install OG Whatsapp which allows you to use two accounts on the same mobile phone.
OG Whatsapp download can be done from the developer’s website.

To use the two Whatsapp accounts on dual sim smartphones we must, therefore, do this:

The second method, safer and easier, however, requires unlocking the Android phone with root and using an app that, this time, can be downloaded from the Google Play Store, Switchme.
The steps to follow for configuring two Whatsapp accounts on the same phone are:

You can easily switch between them with two touches, without problems.

In the end, using Whatsapp with two numbers if the mobile is dual sim operation is completely legitimate, which should be integrated into the main app itself.

Use a GPS tracker with SIM as a mini anti-theft device for cars, motorcycles etc.

How to compress MP4 with programs, apps and sites

How to Activate hibernation in Windows 10