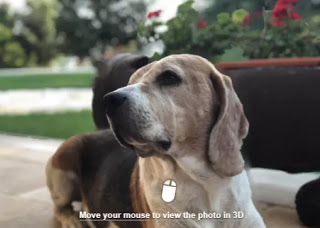 Facebook has a new “Cool” feature that allows you to take 3D photos really beautiful to see.
This mode of photography puts the photographed object in the foreground by slightly blurring the background, giving real depth and movement.
The final effect seems to be that of an image in virtual reality that can be moved using the mouse as if entering it.
When you see a 3D photo from a smartphone on Facebook, you can scroll or tilt the device to slightly change the perspective.
These 3D images are also compatible with VR (Virtual Reality) viewers so you can see them as if you were in the photographed place, entering them.

The 3D photo of Facebook, which makes photos much more engaging and fun, can only be taken with smartphones equipped with dual cameras using the Facebook app that automatically applies the three-dimensional effect.

To create 3D photos with Facebook it is necessary, as mentioned above, to have a dual-camera phone, although currently only iPhones with this feature are supported, namely iPhone 7 Plus, iPhone 8 Plus, iPhone X, iPhone XS or XS Max.
Other Android smartphones like the Samsung Galaxy Note 9 will be supported in the future.

To turn a photo into a 3D photo then open the Facebook app to create a new post, then touch the three-point icon to view the publishing options and then choose the 3D Photo option.
This will open the gallery of photos taken with the mobile phone, those taken in portrait mode, which you can choose to be able to transform into 3D.

NOTE: If it is not available yet, try leaving a Like page on the Facebook 360 page and restart the app.

To have a better performance in creating and sharing a 3D photo on Facebook, we must consider that not all photos can be transformed with this special effect.
The best results are obtained if the main subject is about a meter away and if the photo has more depth levels (for example a photo by the sea or in a flower field).
The subjects photographed must be consistent and well defined, they should not be transparent and there must be a certain contrast of colors between the subject and the background.

On Facebook, you can already see 3D photos in their news feed and in the VR viewer app.
Soon everyone will be able to turn their photos into 3D using Facebook, by the end of 2018.

An example of a 3D photo created with Facebook is this:

Download Notepad as a Windows 10 app with new features