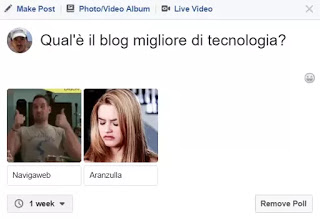 That of the polls has always been a troubled function of Facebook, originally present in the form of quizzes, then only in the groups, then as Questions and now relaunched in a simple modaliàt and also rather amusing.
THE new Facebook polls Yes they can create directly from the box to write the status, both on the site and on the Facebook application.
The peculiarity of Facebook surveys is that you can add, under any proposed choice, a GIF, that is an animated image that allows making the surveys very graphic and more inviting to participation.To create a survey on Facebook you simply need to click the box to write a new status and then choose, among the options below, that of the Polls.
The Facebook survey can only be between two choices, so the question must be like: do you like this or that more? and there is no room for a third option, at least for the moment.
You can instead decide on the duration of the survey, so as to close it within a week, within a specific day, or you can also choose to keep it open forever, accepting answers even after years.

As mentioned above, the best part of the survey done on Facebook is that you can attach, to the two choices, a photo or an animated GIF to look for among those proposed.
The appropriate GIF can be searched by writing on the text box at the top, in a manner consistent with the survey.

From the privacy point of view, the only thing that needs to be considered is that the answers to Facebook surveys are never anonymous and that anyone can see the results and how others have voted.

This feature of Facebook surveys is certainly not comparable to that of other sites for online surveys, but in its simplicity, it can be fun to use, especially when combined with GIFs.

Surveys can still be created even within Facebook groups, where they are slightly different.
In groups, you can enter more than two options to the survey and without images or GIFs.

How to avoid SMS scam and spam

Call landline or mobile numbers from your computer (VOIP software)