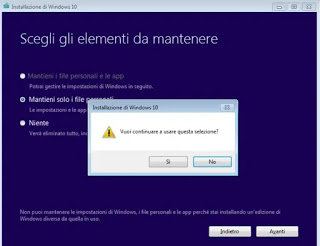 The date of January 14, 2020, will mark the end of an era, in fact, starting from that day, Microsoft will no longer support Windows 7. This means that security updates and fixes (or patches) to protect your computer will no longer be released. from bugs that hackers will discover in the future and from new malware. The time has come for everyone to update the PC with Windows 10. None of the Microsoft software included in Windows 7 will be updated, including the Microsoft Security Essentials antivirus and Internet Explorer (while Office will still be supported until 2023).
While this is a change that can be frightening, the good news, especially for those who absolutely would not want to give up Windows 7 and could decide to ignore any security warning, is that it can still be switch from Windows 7 to Windows 10 for free and without losing the data saved on your computer. Even if the standard guides indicate the opportunity to make a backup before proceeding with the installation of the new operating system, in reality, the procedure for updating to Windows 10 still maintains a copy of the personal data, without deleting them.
Furthermore, even if Windows 7 was an efficient and stable operating system, nobody today can say that Windows 10 is not at least as good, given that after almost 5 years from its release it has been revised, corrected and improved several times, becoming greatly long the most optimized Microsoft system for every type of computer.
So if we want to install Windows 10 from Windows 7 without changing computers and without your personal files being deleted, you can follow the following steps to make an update as painless as possible.

READ ALSO: Free migration of Windows 7 to Windows 10 (on another PC)

How to Install Windows 10 on Windows 7

Windows 10 has very low hardware requirements, so it should also work on older computers. The only problem may be related to the compatibility of PC drivers, but we will see how to verify them later.
In a nutshell, if the PC has 2 GB of RAM and 32 GB of disk space, then Windows 10 can be installed. I refer instead to the dedicated article the guide to check if the PC is compatible with Windows 10.
In another article, we then saw how to prepare the PC before putting Windows 10.

3.1) Update Windows 7 to Windows 10 using the Media Creation Tool
After downloading the latest version of Media Creation Tool from the Microsoft site, pressing on Download the tool, run the file MediaCreationTool.exe.
Then accept the terms of use shown and select the option Update your PC now on the following screen.
Once the selection has been made, you can follow the guided procedure and, when asked, select the option to keep personal files and apps. Eventually, the download of the latest build of Windows 10 will begin and, after a reboot, Windows 10 will be installed without deleting the personal files.
In the Media Creation Tool, you can choose instead of Update your PC, L’option that creates the installation media. In this case, insert the USB stick into the computer and follow the guided procedure that prepares the stick. If you choose this second option, you can restart your PC by changing the boot order and starting it from the USB stick to proceed with the installation. In the installation wizard, you will be asked if you want to keep your personal files or delete everything. The first option will save the user folder files to be able to recover them.

3.2) Update Windows 7 using the Windows 10 ISO file
Even without using the Media Creation Tool you can download the ISO of Windows 10 to be used to update Windows 7 to Windows 10. Once downloaded, you can press the right mouse button on the ISO file, go to Open With and then choose Explore Resources. Find the setup.exe file and double click it to start the installation.
You will then be asked whether to download the updates now or later, whether to get the latest driver updates first and to accept the license terms. Before doing anything, the installation procedure will ensure that the PC is ready, showing a warning in case there is any software that will have problems. In the end, you can choose whether to keep personal files while you will not be able to choose to keep apps too.

READ ALSO: How to install Windows 10 from scratch (clean installation)

At the end of the installation and upgrade wizard to Windows 10, after configuring the preliminary options and after creating a new user with a Microsoft account, the desktop will appear with the new Start menu and the PC and without the previously installed programs, which they will have to be re-downloaded and reinstalled.
Personal files, on the other hand, can be easily recovered by looking at Windows Explorer for Windows. old folder which contains documents, videos, music, photos and all the files saved in the user profile of Windows 7.
As for the account, I refer to the guide on what it means to use the Microsoft account in Windows 10 and how, instead, to use a local account in Windows 10.
I also refer to the guide to customize Windows 10 and to the Windows 10 settings guide for a general overview of all the operating system features.
If you are not satisfied or if there are serious problems with the operation of the computer, you can still return to Windows 7 using the Downgrade function to return to the previous version of Windows.

READ ALSO: What changes in Windows 10 for those who had Windows 7

How to reduce CPU usage on Windows 11 and 10

How to clear activity history on Windows 11 and 10

WhatsApp: news for the management of contacts not in the address book. News also on UWP Windows

Xiaomi 12 Lite: official in pre-order in Azerbaijan with lots of specifications and price