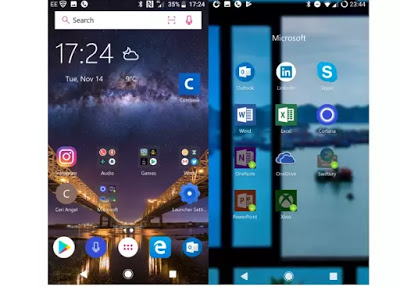 In the face of the admitted and net failure of Windows Phone, Microsoft has changed strategy without abandoning the mobile sector, relying on Android.
The reasoning seems to be the right one and is based on two premises: the fact that Android is the most widespread operating system for phones in the world and the possibility of being able to use Android with a certain freedom, so as to be able to customize it even in depth.
Thus, bearing in mind the need to go through the Google store, Microsoft has started the release of a series of remarkable new applications, which can lead many users to want to transform their Samsung, Huawei or other Android models into a Windows Phone or Windows Mobile 10.Why should we want to turn Android into a modern version of Windows Phone?
Because if there was a merit of Windows phones, this was to make things simpler than ever, while on the contrary, one of the criticisms made of Android is to do complicated things.
If you want then make Android simpler and more intuitive without giving up the functions, here is the idea of ​​transforming Android into Windows Phone can be really satisfying, especially in light of the recent improvements of the Microsoft apps.

We have already discovered, in the past, the best Microsoft apps for Android phones.

To transform Android into Windows Mobile you first need to install the Microsoft launcher.
sando the Microsoft Launcher and combining it with some other apps you can really get the feel of the Windows experience on the Android device.
The Microsoft Launcher does not bring the tile graphics feature of Windows 10 Mobile and changes the main screen of the phone in the traditional way, but with the addition of functions closely related to Windows 10.
With background, fonts, and icons in Microsoft style, it also allows you to browse the news of the day and get the function “Continua on PC“, which appears when you touch the share button in each application.
For example, you can open a photo on Android and then touch the share button and find, among the various options, Continue on PC, which leads directly to sending the photo to the Windows 10 PC.
Continue on PC is a function that can only be used on Windows 10 after updating the Fall Creators Update.

If instead, you wanted to have a graphic perfectly identical to that of Windows 10 Mobile, you could install the spectacular SquareHome 2 launcher, which is not from Microsoft, but it really works wonderfully.
It really won’t seem like using an Android phone with this launcher anymore, with all the apps turned into tiles, easy to use and with lots of customization options.

Outlook, Cortana, OneDrive: it’s Windows
Obviously it is not enough to transform the graphics of the interface of the phone to enter into Windows and it is thanks to the other applications that complete integration is obtained.
Using the same account with which you log in to Windows 10, you can use your Android smartphone as a PC extension via apps like OneDrive, OneNote, Microsoft Outlook on Android and even the voice assistant Cortana (who from Italy we are obliged to download from APKMirror) in addition of course to all Office programs and other applications of the Microsoft galaxy such as Skype and Linkedin.

Don’t forget the browser Microsoft Edge for Android, which allows you to surf the Internet on your phone, picking up where you left off on the Windows 10 PC.

This new strategy shows how Microsoft would no longer actually need to sell a Windows-based mobile device, because thanks to Android’s flexibility and popularity, it can bring many more users to use its services than with any Windows Phone.
For those who want to get out of the Google world and especially for those who want a continuous experience between PCs and smartphones a bit like with iPhone and Mac, then moving to Microsoft apps could really give satisfaction.

READ ALSO: App to make Android look like a Windows or Mac PC

How to configure the Vodafone station