Home WhatsApp Which is better between Whatsapp, WeChat and Viber? 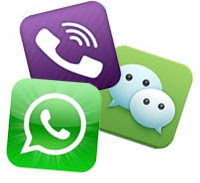 If text messages are dying (or are being given away more and more in offers), the credit goes to the new ones messaging smartphone apps that, compared to those of the more recent past like MSN Messenger, they are not tied to a registered account but to the telephone number.
This is a significant difference that links applications such as WhatsApp, Viber and the most recent WeChat who recognize from the user’s phonebook which are the friends who have the app installed, with whom you can, therefore, send messages for free (always using an internet connection).

The three most used applications in the world are WhatsApp, the undisputed leader in mobile messaging, Viber and the Chinese WeChat.
These three applications, although similar to the base have many differences and it is worth, then, to see which is the best and which is worth using based on 5 characteristics.

An important thing to decide which application to use is to verify that it is compatible with as many cell phone models as possible so as to make sure that it works for us and for friends.

– Whatsapp works up iPhone (iOS 4.3 and above) e Android.
It cannot be kept active on two different platforms simultaneously
It is not possible, however, to download it on iPod, iPad or any other tablet of any operating system and even on an unlocked iPhone with Jailbreak (or perhaps it is possible but without support and optimization).
WhatsApp also works on Blackberry (OS 4.6 and later), Windows Phone 7.5 and above and a good number of models Nokia S40 and S60.
WhatsApp is also a paid application that costs 1 Euro for iOS while it is free for one year for others (then it will cost 1 Euro a year).
Who already has WhatsApp for Windows Phone will never have to pay to use it.
WhatsApp can also be used via the web on a PC.

– Viber works up iPhone, Android, Windows Phone 7 and 8, Blackberry OS5 and OS7, Nokia S40 and S60.
Viber also works on the Bada operating system and the version was also recently released for Windows and Mac PCs which works in parallel with the mobile app.
Viber cannot be installed on Android tablets.
Viber is a free application and without advertisements of any kind.
In addition to messages, Viber also allows you to make free phone calls.

– WeChat is a more recent free application than the other two that works a bit on all smartphone models: iPhone, Android, Blackberry, Windows Phone, and Nokia S40.
In addition, WeChat also works with a web interface and as a program for Windows PCs, so you can chat with friends even from a computer or by opening the WeChat website (but first you need to register with a smartphone).
Web Chat is also useful for sending files to your mobile from your computer.
Opening WeChat on the PC there is also a plugin called Web Grab to send web pages from the computer to the phone only by shaking the handheld cell phone.

– Whatsapp, using the Internet connection allows you to send text messages, photos, video clips, location data (which open on Google Maps), audio clips, someone’s mobile phone contact.
However, voice calls cannot be made, at least for now.
WhatsApp also allows you to make group chats (max: 30) and use many smilies or Emoji.

– Viber, in addition to messages also allows you to make voice calls as you would with Skype, free to other Viber users.
With Viber Desktop, you can also make calls from your computer.

– WeChat is the most complete of the three apps and allows not only to send text messages, images, videos, audio recordings, position data, emoticons and contacts, but also to make video calls and use the mobile phone as if it was a walkie talkie (ie we speak one by one in turn).
WeChat is also the only app with some social add-ons that allow you to make new friends randomly, with people detected nearby.
You can even send messages to the bottle in the open sea with the Drift Bottle function that can be read by strangers.
If you do not want to use these social add-ons in the settings they can be deactivated.

These applications use the device’s contact list to determine which of the contacts are already using the app so they can immediately chat with them, without asking permission.

– Whatsapp requires a valid phone number to register for the service.
When you are registered on your mobile, WhatsApp scans the contacts of the device to determine who is already on WhatsApp so you can send them messages without having to wait for any type of contact approval.
This also means that whoever has my number can contact me in WhatsApp (even if I don’t have his).
You can still block some annoying contacts from the chat settings.
In Whatsapp, all contacts can see when we are online, when we last connected and when a message is read (when the double v appears).
See how to be here invisible on Whatsapp and hide the access and reading of messages

WhatsApp only works on one device for each account and if you register on another phone, you are disconnected on the first one.
WhatsApp encrypts sent messages that cannot be easily intercepted by third parties.

– Viber works as WhatsApp in the registration and uses a mobile number to validate the user.
Viber, instantly, integrates the list of contacts from the phone’s address book into the application and you can immediately see the registered contacts that already have the app installed and that are online.
You can hide the online status or the last access date in the application settings.
Viber uses Google Analytics to monitor its users’ information.
Still, in the settings, data collection can be disabled.

– WeChat also requires a mobile number to register and shows which other friendly users (whose phone number is on the phone book) have the application.
Unlike the other two, in WeChat you cannot immediately chat with the contacts found, to start messaging with them you must send a contact request that must be approved.
The social extensions of WeChat, allow you to find strangers with whom to chat, even without sharing the phone number but using the WeChat ID (so you can hide your identity)
There are many privacy options in the application settings.

– On Whatsapp, the backup process is different on each device.
However, in WhatsApp, the chat history on the device is automatically saved on Android, Windows Phone and Nokia.
To transfer all the chat history to another mobile (imagine that you have a new phone) you have to do it manually.
On iPhone and Blackberry send the conversation to ourselves to save it.

– Viber it has a simple backup function because every text conversation is a CSV file.
– WeChat has all the backup options to transfer the chat history of the last 7 days to another device without difficulty.
There is no option to export chat history to a file.

In the end, this is the most important key in comparison because a chat application can be as beautiful as we like if there is nobody there but we do very little.
Here then is the weak point of a powerful and amusing app like WeChat, which, at least for now, in Italy, is used very little.
In my case, on a phone book of 200 telephone numbers, about 50 are on WhatsApp, 7 on Viber and 3 on WeChat.
Whatsapp, despite being paid and even if it has fewer functions than the other two, it is, however, the most popular and used in Italy.
WeChat says it has 400 million registered users, except that only 50 million of them are outside of China (where WhatsApp almost does not exist).
It must be said, however, that a lot of advertising on TV (with Leo Messi) by WeChat is making this application known, and who knows, users may not grow quickly.

In conclusion, it is definitely worth installing WhatsApp on your smartphone which remains the main app to send messages and to be contacted by friends.
Viber is useful for making free phone calls via the internet as it is done with Skype, therefore, remains very important.
WeChat finally, in addition to the fact that it can be installed while waiting for other friends to enter, it also works to have fun and meet new Gentis.
These three applications are incredible tools for communication that will definitely supplant the regular and expensive SMS service.

Beyond these three messaging applications we cannot forget that there are also free services of three giants of the web like Facebook Messenger, Google Hangouts is Skype from Microsoft.

How to cancel app subscription on Android and iPhone / iPad