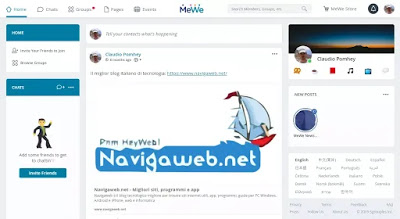 With Facebook’s reputation in clear crisis after the recent privacy scandals, uncontrolled espionage and the so careless management of user data, given that by now the trust in those who manage Facebook has fallen to a minimum, it would not be like this. idea of abandoning it completely.
Keep in mind that Facebook’s very aggressive advertising activity collects (some would say it steals) user data through all the services it owns, so even those who are not Facebook members, but have a Whatsapp or Instagram account, it would still be in the system, monitored and subject to data collection.In this article we see the alternatives to Facebook, that is sites and applications that can be used instead of Facebook, Instagram and Whatsapp, designed to do the same things, but with clearly stronger privacy policy and more protective. Certainly this is more of an experimental article since it has become extremely difficult to replace Facebook and its applications. Facebook will continue to be a social media giant even for the foreseeable future, no other platform has its user base and it is almost impossible for it to fail. Furthermore, tools like Whatsapp are now used by everyone and giving it up would mean depriving yourself of the most used message tool in the world.
It still becomes interesting to go and see what they are alternatives to Facebook as a social network, le alternatives to Whatsapp (and Facebook Messenger) as a message and email app alternatives to Instagram as an app to share photos, so you can maybe exit completely from the Facebook ecosystem or just to try apps and sites that are similar and more secure in terms of privacy.

To replace Facebook, we are not talking about alternative social networks like Twitter or Vkontakte, but about applications that replicate Facebook’s functions and are not part of a profit-making company. Unfortunately, it will be necessary to take into account that Italians registered on these platforms will find very few.

Mewe is a social network that enhances the privacy of users by promising never to publish advertisements, not to track users or sell their data. The completely free service is offered by offering small subscription plans to enable some special features, such as an additional cloud storage space and a secret chat.
MeWe can be used via the website, via an app for Android or iPhone.

Diaspora is another alternative to Facebook that has the distinction of being a decentralized platform, ie it is not managed by a single organization but distributed on independent servers (which Diaspora calls “pods”). Indeed, having the right knowledge, you can even start your own server in Diaspora. Users who sign up choose which pods they want to join and do not necessarily have to use their real name. Most pods focus on certain topics, such as photography, nature, technology or other interests. You can register an account on Diaspora for free at diasporafoundation.org

True is another social app that wants to be a competitor to Facebook correcting flaws, it deals with some of the biggest annoyances when using Facebook: feeds influenced by the algorithm, data collection, and advertising. The posts are then displayed in chronological order. True it also has a messaging feature and a variety of features that really make it an interesting competitor for Facebook. In terms of monetization, the company plans to introduce, if necessary, a subscription; at the moment, registration for a free lifetime subscription is guaranteed.
Vero can be downloaded as an app for Android and iPhone)

Mastodon is a social network that follows Twitter, launched in 2017, free and open-source (no company owns it and can earn on it) that can be used in the same way as Facebook.

While you can still give up Facebook, it becomes really hard to think of being able to stop using Whatsapp, since it is used by all our friends and family. At the same time, however, while the Facebook alternatives are more like experiments to be tested, Whatsapp’s alternatives are decidedly mature applications, with so much popularity and many more functions. It would not be so dramatic, therefore, to switch to the use of one of these applications and convince even friends to do so.

Telegram is an already very famous app for PC, Android, and iPhone, with many subscribers also in Italy, one of the most popular alternatives to WhatsApp. These messaging app privileges chat encryption, security and seamless connectivity. The company’s promise to keep the app free forever, without advertising or subscription costs, is another strong point.
We have seen in another article everything that Telegram has more than Whatsapp.

The signal is another application widely used in the world, open-source, owned by a non-profit foundation, which gives priority to user privacy. The app has attracted supporters and users thanks to its encryption protocols, and the function it allows create secret and untraceable chats with Signal.

Wire, for PC, Android, and iPhone) is a messaging and collaboration platform created with the involvement of Skype co-founder Janus Friis. The platform is secure and with end-to-end encryption, with group chats and video calls, as a valid and solid alternative to WhatsApp. Wire offers a personal and free plan for a private chat, then also paid professional plans for companies that wish to use it for collaboration between employees.

Although not created by Facebook, Instagram, since its acquisition by the company in 2012, has played an increasingly important role in the Facebook advertising platform and has become the favorite network of VIPs and those who want to follow VIPs. If you wanted to use a photo-sharing platform without celebrities and even without the Facebook brand, here are some Instagram alternatives to try.

VSCO, for Android and iPhone, is a popular photo editing app that lets you share creations with the VSCO registered user community. Instead of relying on advertising, the developers monetize the app with an optional subscription plan. Who wants to use it for free has to access to filters, editing and sharing tools anyway. Just like on Instagram, you can follow other VSCO users and browse images based on a hashtag.

EyeEm, for Android and iPhone, is a photo-sharing platform that is aimed primarily at professional photographers, where you can also sell photos and receive feedback from other photographers. Users retain the copyright on their images and in the event of sale the price must be divided between user and platform.

500px, for Android and iPhone, is another alternative to Instagram aimed at photographers who want to share their work or sell photographs. Here too you can follow other users and topics.

Ello was initially born as an alternative to Facebook, which then became an image site for artists who can then share images of their work with other people interested in seeing them.

READ ALSO: How to create a private profile on Instagram

WhatsApp: data transfer from Android to iOS in roll-out. Here’s how to proceed