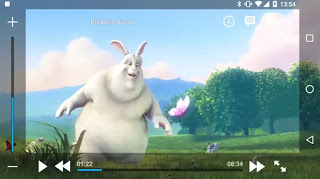 In this new list of applications for Android, let's see best videos and media players to see all kinds of multimedia content from your mobile, including movies.
In every Android smartphone there is an app
The default video player of Android, which changes depending on the brand of the phone, is usually not a standard app, which does not support all types of videos, with basic and sparse interface, very little functionality.
That of the video player for Android is therefore a type of app to always install on a smartphone Huawei, Samsung and all the others, in order to be able play every type of video format, including HD movies taken from the internet or from DVDs.

If to watch videos and movies on iPhone and iPad, the best applications are almost all paid, with Android the speech is very different and, looking at the Google Play Store, you can find different apps that you can download and use for free and without limitations .
Below, therefore, the top 20 apps to watch videos and movies from an Android phone or tablet, which read everything, including AVI and Divx, without having to do conversions between formats.
The applications on the list should work with all models and brands of Android phones and tablets, but some may be more powerful and better than others depending on the phone you use and its processor.
Of some applications on the list, there is also a paid version without ads, so if these free apps do not fully meet, maybe you can buy the full version.

1) VLC for Android is the famous open source media player available for Windows, Linux and Mac computers, now also an application to watch all kinds of videos or movies on Android, free.
VLC is a video player that lets you watch HD videos in high quality from Android devices.
Other features of VLC for Android include network streaming, equalizer, video filters.

2) MoboPlayer for Android it can play virtually all major video formats using its own internal codecs.
This means that you don't need to convert a video file to another format.
Moboplayer also supports the MKV and MOV format, supports SRT subtitles and can also be used to watch streaming video from websites that use HTTPS or RTSP protocols.
If it doesn't work well, you need to install the Mobo Player Codecs for free from the market, different for each processor.

3) MX Player is the third great free application to watch videos and movies on Android without worrying about the format. You can play 3gp, avi, divx, f4v, flv, mkv, mp4, mpeg, mov, vob, wmv, webm and xvid movies and even subtitles.
The interface is very convenient to use, there is a subtitle scrolling function and the ability to browse through folders to find videos saved in the phone and tag them.
You can adjust the movie display and volume with quick touches on the screen.

4) BSPlayer is a phenomenal program for Android capable of playing any video and film on mobile.
The player uses hardware acceleration for video playback to reduce battery consumption.
It supports almost all multimedia files (video and audio), including: avi, divx, flv, mkv, mov, mpg, MTS, mp4, m4v, avi, wmv, 3gp, mp3 and also streaming video online http and RTSP .
You can find movie subtitles in the original language automatically and it also works to watch computer videos on Android, using the Wifi connection.

5) KMPlayer is the Android version of the famous PC media player.
In the settings it is possible to change the orientation of the videos and the detection of the headset.
The player interface is hidden by default when you play a video.
Touching the screen the controls appear at the bottom of the screen.
The application can play all videos on your mobile, even high-quality HD and 4K videos and even videos streamed from the internet, including those from Youtube.

6) XPlayer is one of the best applications to watch videos on every Android smartphone and tablet, with a very clear interface and support for all common video formats.
The app includes support for all video formats including 4K / Ultra HD video files.
There is also a function to hide the videos so you can see them only by entering the password.
There are several themes, including dark mode and night mode, posters and movie titles are automatically downloaded and also supports networking to import files from SMB servers and UnPnP servers.

7) Archos Video Player is one of the best video players on Samsung, Huawei and all those with the Android system.
The beauty of this video player is its interface, which is not only beautiful, but also very easy to use
The app shows all the videos that are saved in the device's memory, and also works to play videos on the Internet, videos from servers, NAS and from the PC.

8) HD Video Player it is an excellent reader with very comfortable touch and volume controls.
The player's controls are easy to use and include a 10-band equalizer.

9) UPlayer is a program to watch videos with all the codecs included for the various popular formats, regularly updated and among the most used.

10) PlayerXtreme Media Player is one of the popular and most downloaded media players on Android, which works well for listening to music, watching videos, broadcasting videos online, with support for almost all major video file formats.

11) FX Player it can play flash files in addition to normal videos with support for almost all file formats.

12) GOM Player is another of the best video player apps on the list, Android version of the popular PC video player.
GOM Player is fast and free, with all the basic features and the ability to play 360 videos.

13) AllPlayer is an application for Android compatible with all common video file formats, with a slightly old interface but full of options and also with support for subtitles and hardware acceleration to improve performance.

14) Kodi for Android is the app for those who want to watch videos even those stored on a PC, in addition to IPTV, streaming video and online TV.

15) Wuffi Media Player is an app that supports virtually every video format and also http and rtsp streaming via the internet.
This app is also perfect for watching Acestream on Android.

16) Leopard video player is a video player among the most voted for Android, with support for all audio and video files.
The other features of this Video Player include playback speed control, widgets and gestures.

17) Plex it's not just a video player but can play music, photos, movies and streaming.
Plex is useful on the phone especially if you use Plex on a PC, to watch computer movies streaming on the smartphone screen.

18) Video player for Android is a very powerful, free application that allows you to finally watch movies on Android and videos of any format.
It supports AVI, MKV, MP4, MOV, WMV, ASF, WMA, WAV, MPG, VOB, OGG, FLAC, SWF and other formats and is simple without unnecessary functions.

19) Super Video is a streaming video player for Android that is also good for playing video files.
Its peculiarity is that you can play multiple local and YouTube videos simultaneously, through various resizable and mobile windows.
From the very clear and simple aspect and with the controls clearly visible, the application allows you to play almost all the video files saved in the external memory of the mobile (3GP, RMVB, MKV, AVI, VOB, WMV, MP4) and those of Youtube .
Furthermore, the application supports auto-detection and subtitle synchronization (SRT and ASS files) for videos in multiple languages.

20) Wondershare Player is a complete and free video player for Android that, in addition to borrowing most of its features from MX Video Player (number 3), supports the additional possibility of viewing high quality streaming video from video services such as YouTube, Dailymotion and many others.
For movie playback, Wondershare Player supports the most common video formats, such as MKV, AVI, VOB, RMVB, FLV, WMV, MOV and others, without the need for additional codecs. Moreover, it boasts several very useful features, including:
– Support for DVD menus;
– Possibility to select the quality of online video streams on-the-fly (also supports 1080p videos);
– Web browser for streaming video content;
– video controls for screen brightness, volume levels and proportions;
– Streaming from the PC;
– Ability to download media files from custom lists.

ISE 2022: from Samsung the new developments of Micro-LED technology