Home Games Board and company online games: Risiko, Monopoli and others

Best sites to find and play online and multiplayer table games like Monopoli, Risiko, Scarabeo and many others 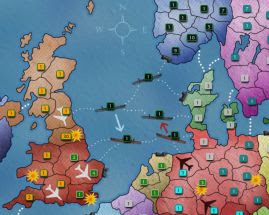 The old people board games, that tableware to which all the 15/20 years old boys played with their friends at home, have now turned into online games with multiplayer challenges and internet games online.
There are no longer the cardboard boxes that contain the boards, the placeholders, the dice, and the hourglasses, but, to play, all you need is a PC connected to the internet.
Games like Risiko, Monopoli, Scarabeo, Backgammon, and others can be played online on the computer against players from all over the world.READ ALSO: Best table games for Android and iPhone to play in the company

1] In Italy the market leader of social games is the Editricegiochi web portal specialized in table games, there is also one of the best of the genre, Risiko and Scarabeo are about to be released.
The game is the same invented 50 years ago, a war between people armed with carrarmatini, aimed at conquering the world.
The official Italian digital version is called Risk Digital, available online, on Facebook and as an app for iPhone and Android.
Unfortunately, Risiko Digital is not free.

2] Risk online free is difficult to find in the original version, but you can enjoy Atwar, a browser game that is inspired a little by Risk and a bit by Civilization, free, where you can play in multiplayer mode with other players and in Italian.

3] To find other free web applications to play online in style Risk you can register on the site GSkirm which is a Risk on Google Maps, then you can play NetPigs or World Wars.

4] Kdice it’s not really Risk but it is a strategic turn-based war game that looks like a poker game that you can play freely and for free.
Everything takes place via browser and its community of players is very rich so that on Wikipedia there is a very detailed review.
It looks like a table game and 7 players compete for each board.
Being a multiplayer game, there is also a ranking, the rank, with the best and the challenge is very lively and competitive.

5] Conquer Club It’s a real online turn-based risk where the goal is to conquer the world.
The game here is not fast, it is, in fact, a browser game like those seen in the list of the best online browser games, destined to last several days and in which every move must be made at least within 24 hours.
If on one hand, it can become a pastime to which to dedicate 5 minutes a day, it is easy to imagine that there will be the most competitive able to stay awake at night to reflect and think about the moves to be made to become masters of the world.
Diplomacy is important and we can agree to destroy the game leader and bring him down.

6] NetRisk is a beautiful and free Risk multiplayer game to download on your computer that allows you to play against other real players, up to 8 per game.

7] For those who want to have fun with single and fast games against the computer, they can download the true Risk which is also available in Italian and which is neither multiplayer nor online.

8] Monopoly Online is on the Pogo.com website.
Monopoli you can also play, in an unofficial version, on Android.

GtkAtlantic it’s a clone of Monopoly online and the best free alternative that you can find, especially because there is also the possibility to challenge your friends online and play online.
In addition to the possibility of creating a game on the private network, there are also six public servers to confront other players.
Gtk Atlantic is available for both Windows and Linux.

The game of the original Monopoly instead it is Monopoly Deluxe, which can be downloaded for Windows PCs and shows the classic scoreboard of the good old game of houses and hotels.

Although it is not playable online, I leave the link to download the true Monopoly for the PC that you can play against the computer or against other friends, from the same computer.

8] In another article listed the best games Scrabble and Lyricist online and as an app for Facebook, for Android and iPhone.

9] Some board games with board and cards to print

10] On the site Macro Gamers There are several table games to play on the internet: Naval Battle, Checkers, Chess, Sudoku, Backgammon, Dice, Poker and others.

11] Always table games are online card games like Scopa, Uno, Poker, Burraco, and the solitaires, listed in another article.

12] For mobile phones there are instead free applications to play cards on Android, iPhone, and iPad

13] In another article, best free Chess and Checkers games on the web, on Android and iPhone.

14] Up Facebook, we have several applications that recall old board and company games: Chess, Checkers, Backgammon, Mahjong, Dice, Naval Battle.
All games that are added to the best video games on Facebook, seen in another article.

Finally, to play at Sudoku and Puzzle Games, I refer to the related page with many ideas and alternatives.

Download Whatsapp for PC and Mac app and official program

Borderlands is having its best year: here are the latest news