Home Network Differences between 2.4 GHz and 5 GHz Wi-Fi networks; which is better?

What are the differences between 2.4 GHz and 5 GHz WiFi networks? when is one better when the other? 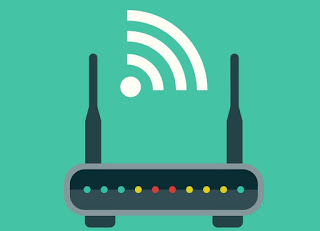 Buying a new wireless router we will often find the word Dual Band, which indicates the presence of two distinct Wi-Fi networks, one at 2.4 GHz and the other at 5 GHz. Those who already have a router for many years will have undoubtedly exploited a 2.4 GHz network and think that by doubling the number we will get more speed and coverage in every scenario.
Unfortunately, the reality is very different: the two networks using different frequencies and both have disadvantages and advantages, to be carefully evaluated when we connect a new device to a router that allows you to choose which network to use. In this guide we will show you in detail the differences between 5 GHz Wi-Fi and 2.4 GHz Wi-Fi, also indicating which network to use based on the device we intend to connect to the wireless Internet. You will realize that, in some scenarios, it is not possible to use 5 GHz and we will have to use the 2.4 GHz network.

The two numbers indicate the electromagnetic frequency used by routers to spread the wireless network in the home; precisely because the type of frequency changes, the advantages we can use when connecting a new device also change. 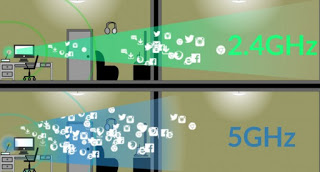 With a 2.4 GHz Wi-Fi network, we will get good signal coverage (up to 30-40 meters), so we can also connect devices that are distant from the signal’s point of origin (the router, but also a Wi-Fi repeater or a dedicated access point). Networks with this frequency they manage to overcome most of the walls of the house, so as to cover even more rooms (much depends on the nature of the walls: the bearing walls or the stone walls are much more difficult to overcome).
Against the connection speed is not very high: we can reach a maximum of 300 Mbps, exploiting certain intrinsic characteristics of some protocols used to transmit on this frequency.

On 2.4 GHz networks, 11 transmission channels are available: by placing our network on a free channel, we will get fewer interferences with neighboring Wi-Fi networks (always on 2.4 GHz) and on electronic or computer devices operating on similar frequencies (for example Bluetooth, telephone fixed cordless or microwave oven). Conversely, if there are many networks in the neighborhood and all channels are busy, we should expect a lot of interference, a drop in performance and coverage.
The only protocol that we recommend using this frequency is IEEE 802.11n or Wi-Fi 4, which allows reaching 300 Mbps in the best transmission conditions. We avoid using IEEE 802.11b / g, now too obsolete (should be maintained only to connect wireless devices older than 2010).
In this regard, we invite you to read our guides on how Connect to the wireless channel of the Wifi network with the most powerful signal is Compare WiFi networks to find the best (wifi analyzers). 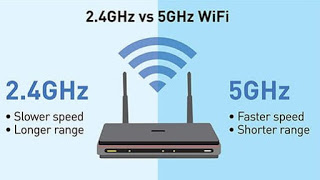 With a 5 GHz Wi-Fi network, we will get one great speed of data transmission (up to 1300 Mbps), but on the other hand, we will have a signal that it will be difficult to overcome the walls of a room. This limit is physical (it is not possible to change the electromagnetic physical laws) and cannot be exceeded, except by using Wi-Fi repeaters or Wi-Fi Powerlines (we talk about it in the next chapter). This frequency is less susceptible to interference since the signal with great difficulty will come out from the perimeter walls of the house (and consequently the other 5 GHz networks of our neighbors will behave accordingly).

When buying a new router, let’s make sure that Wi-Fi 4 and Wi-Fi 5 are supported (also in mode Mixed, ie with the possibility of using both) to be able to connect all the devices on the market with support for Wi-Fi Dual-Band; models with Wi-Fi 6 are still rare and very expensive, even if they start appearing on the market.

How to exploit both types of networks

As we could guess, we don’t have to focus on just one type of network, but we will have to configure both so that we can use them together based on the distance from the router and based on the type of device connected.
First of all, we configure the router (or the modem/router provided by the operator) to create two distinct Wi-Fi networks by frequency: routers often use only one network mode (with only one SSID) and automatically choose whether to take advantage of the 2, 4 or 5 GHz. We advise you to make this choice from the first connection, thus creating two networks with similar SSIDs but clearly showing us the frequency that we’re going to take advantage of.

We then enter the settings of our router, access the menu Wireless or Wi-Fi e we configure the 2.4 GHz Wi-Fi and 5GHz Wi-Fi networks separately, changing the SSID of both (on the 5 GHz we can add for example the suffix 5G, so as to recognize it immediately). 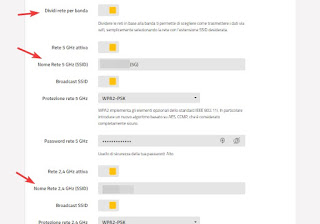 For convenience, we can also leave the same network password, so as to remember it regardless of the network used.
Once the networks are configured, connect to the 2.4 GHz networks all devices that need maximum coverage and moderate speed, such as:

These devices can also be connected to a 5 GHz Wi-Fi network if they are close enough, but they are unlikely to use it properly (especially the very “mobile” devices, which we easily carry from one room to another).

instead connect to the 5 GHz network all devices that need maximum transmission speed and are fairly close to the router (indicatively in the same room), such as:

We avoid if possible to connect the devices present here at the top to a 2.4 GHz network, in order not to have problems of transmission speed and interference; if they are too far from the 5 GHz network, we use the Wi-Fi repeaters or gods Powerline Wi-Fi.

Properly exploiting the types of wireless networks available will allow you to benefit from the maximum network coverage for devices that we often carry with us and to benefit from the maximum transmission speed for devices that require large amounts of bandwidth and low latency to be able to exploit properly the most modern Internet services. Connecting everything to 2.4 GHz or 5 GHz is usually the wrongest move we can make: better knowing the strengths and weaknesses of both types of network and using the one best suited to the device or home configuration.

We do not neglect the possibility of connecting PC or Smart TV to the router via Ethernet cable (if close enough), which is always the most stable and secure connection method (READ ALSO: Better a Wifi network or Ethernet cables? which is faster?).
If we have to choose a new router, we carefully follow the advice described in our guide to Best WiFi Routers to connect wireless devices at home.
To increase the coverage of the wireless connection at home we can also connect two routers together, as seen in our article on how Connect two wireless routers to increase WiFi range.

Corded or wireless mouse: which is the best?