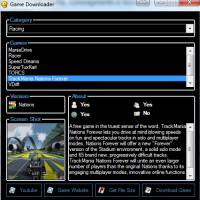 In this blog he devotes himself one day a week (Saturday) to free video games, sometimes online ones, sometimes the ones you can download for free.
If you go to browse the pages under the category “Free games“, you will find numerous freeware games and games developed by independent programmers, very often open source, available for Windows, Linux and Mac and, in many cases, multiplayer, with the possibility of playing against high people via the internet.
Most free games cannot be compared visually with those PC video games found in stores like Battlefield 3 or like the GTA series, but if you are not a fan of realistic graphics, some of them reach the same level of quality in playability, involvement, and history.
Last year’s flash online games are also much more than simple pastime games.

Since it is difficult to find sites specialized in reporting free PC games, a small program that collects becomes really use more than 100 games totally free to download for free and to install on Windows.

The portable application Game Downloader (you can also download the version with the installer that looks more stable) is a list of popular free games grouped in different categories, which can be downloaded directly from the program interface.
If you choose the version with installation, you can start Game Downloader from the programs folder.
The categories are 16: Action, Adventure, Arcade, Cards, RPG, Simulators, sports, race cars (Racing), Platform, Shooter and many others.
For each category, the various games are listed, including several titles already reported also on How2do.
After selecting a game, you get a preview image, a short description and then 4 buttons.
One to watch the video on Youtube, one to access the official website of the game, one to get the file size and finally the button for immediate download of the game.
Among the best free games on the list, there are many unknown and some very famous titles of which you can search for more information using the search bar above.
For example, you can immediately download music games with Frets on Fire and Ultrastar Deluxe, Shooter games like Urban Terror, Alien Arenza and Cube 2, Platform games like Super Mario, machine games like Trackmania or TORCS and so on.
Obviously each of these games can be downloaded from the home page of the program so, by opening the game’s website (from the relevant button), you can check if there is an Italian version and even if there are versions for other platforms like Linux and Mac.
Once the game has been downloaded, go to the folder download where the Game Downloader .exe was saved, where the .zip files with the name of the game were saved.
Unzip the file and run its executable EXE to install the game and start playing the game.

The great advantage of Game Downloader, a small and simple program, is that the downloads can be really fast and more comfortable, with a direct link with which you can’t go wrong.
Furthermore, for each game, it says, above the description, if the game is multiplayer or singleplayer, if you can play online via the internet and if you need to register an account before you can play.
Among the defects instead it is noted the lack of a search box so the titles should be searched by eye, the games already downloaded are not marked and information about the minimum requirements of the various games and other details of compatibility is missing.
It would also have been nice if the program offered a direct link to automatically download all the games in a category.

The fact remains that Game Downloader gives way to discover and play for free more than a hundred video games for all tastes, dedicated to all those who did not believe there were free games so well made and fun.
In this regard, I remember the list of best free games for Windows, Linux, and Mac.

Build yourself a perfect PC to buy on Amazon

Find out who blocked you on Whatsapp

Android IP and APN settings to configure the network