Home Android Here is Android 10: Features and news to discover in the last... 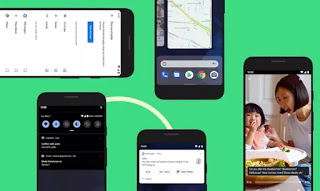 One year after the last update, Google has released a new version of Android, this time called simply and without names of sweets: Android 10. This version of Android is immediately available for Google Pixel smartphones and will be, slowly, distributed on other brands smartphones depending on the manufacturer (which will have to adapt Android to its devices). With this version, Google wanted to simplify the features based on the automatic learning of smartphones, added support for new technologies such as i Foldables (foldable smartphones) and 5G, improved privacy and data security settings and added some interesting system features like dark mode and improved battery management.
In terms of appearance, Android 10 changes quite little compared to Android Pie, with more refined and neat graphics but no different. Most of the changes are located under the hood of the operating system and are not visible to users.

As we always do, let's see here all the best new features of Android 10 (starting from the description of the Google blog) and how to start using them when we receive the update.

Perhaps the most anticipated new feature of Android 10 is the dark mode or dark theme. With this option, all apps with a white background will be transformed and have a black or dark gray background. For some apps this change will be automatic, while for others you will have to activate the option in the settings of the application itself.
The dark theme in Android 10 can be activated fromicon found in the quick settings phone, by pulling down the notification bar. Alternatively, you can find the switch in the screen settings.
The dark color scheme can have a significant impact on battery life for OLED-screen phones and dark mode is automatically activated when battery saving mode is activated.

Gesture navigation has already been technically introduced with Android 9, but is now perfected. The options to configure the navigation with gestures can be found in Android Settings, below the section System, with the name System navigation. You can then hide the three buttons at the bottom and use one of them just like on the iPhone or with a thin line and with the possibility to try gestures.
You can then activate gesture like:

Since the Back button disappears, to exit a screen when using an app you have to scroll on either side of the screen: swipe left from the right side or swipe right from the left side to go back, when you feel a little vibration , just lift your finger to exit the app you were using.
In the gesture settings you can adjust the sensitivity of the scroll and other actions on the side screen.

It wouldn't be a new version of Android without some changes to the app notifications, which now allow you to silence notifications or touch a new simplified settings menu to find more granular options.
Inside the notifications panel, you will find a new grouping for silent notifications, so you can quickly see what happened when the smartphone is set without a ringtone. The Notifications tab now shows an estimate of the number of notifications an app sends each week, so you can decide whether to limit them.

Sharing options have now been simplified. tapping the share button or icon within an app you will find a faster menu with a different graphic that makes the choice of where to share faster. In Android 10, sharing is divided into logical boxes: frequent message recipients, apps suggested based on usage and an alphabetical list of all possible destinations.

Android 10 has a new feature called Focus Mode which serves to keep attention on what you are doing, the app or the game you are using. This mode can be activated quickly by the button in the phone Quick Settings.

Parental control to limit the use of the phone to children or children, which Google provides through the Family Link app, is now integrated into Android 10. You can then quickly set up an account and set limits on children's activities or approve any requests for extra time for use and for playing.

In the latest versions of Android, Google has worked to make the system more private and transparent and version 10 continues in this direction even though many changes are behind the scenes. For example, apps cannot access clipboard data or information such as IMEI and serial number without requiring privileged authorization.
The privacy settings are much easier to find in Android 10 with a new menu Privacy in Settings, in which Google has collected a series of controls to limit the amount of data that the company can access. Most controls are also available in other menus (location history, announcements, lock screen content, etc.), but now they are also grouped in one place. There is also a useful new tab for using accessibility to find out if any apps have full access to the device.
Within the Privacy tab, you can also find a new authorization manager to see which apps access items such as the camera, contacts and microphone. For authorization to access the location, there is a new option to allow it only when using the app, so as not to be monitored by an app running in the background. Google will also send notifications to give evidence of privacy settings so you can edit them directly by tapping the notification.

In Android 10, Google simplifies the sharing of wifi passwords by putting a new Share button in the network settings, in the section that lists the wifi networks known by a QR code.

Automatic subtitles in videos, podcasts and audio messages on any app, even when registered. This allows, for example, to read the audio messages received on Whatsapp.

As in previous years, Android 10 will initially be available only for Pixel phone owners, with other smartphones that will be updated this year. Depending on the type of phone you have, you could also wait several months before receiving the new version of Android and even though Google has made progress in convincing phone manufacturers to send updates more quickly, Android still has an adoption rate of very slow update for new versions.

ADSL and fiber testing: how is internet speed measured?