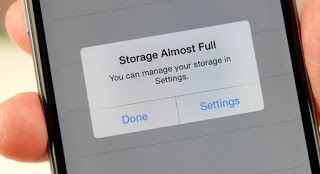 One of the most common ways to save money when buying a new iPhone is to choose the smaller model: for example, many users settle for 64GB while ignoring 128GB or later models (which can even cost double!).
The problem with any smartphone with such limited memory, if you can't expand it with an SD card like some models of Android phones, is that they fill up quickly and run out of available storage space, especially if we install new applications, if we receive many videos and photos from chat groups on WhatsApp and if we do ourselves many photos and videos.
When the iPhone is full or we almost have to act quickly before it's too late! In this guide we will show you all the tricks we can use to immediately recover a lot of space and be able to install new apps or take new photos or videos.

READ ALSO: All the ways to free up space on the iPhone if insufficient

How to clear iPhone memory full

By applying to the letter the suggestions proposed in the following chapters we will be able to empty the iPhone memory before it is too full. It is advisable to always keep the occupied space under control and act before the memory fills up, otherwise we will not be able to use new apps, download new iOS updates and block the receipt of new videos or photos from social networks or messaging apps.

How to control the space occupied

First of all we check the remaining space of the iPhone by taking us on the path Settings -> General -> iPhone Space which are the largest apps (which will then be uninstalled and reinstalled if you want to delete the temporary data they have created) and which file categories take up too much space, by directly checking the colors of the bars at the top. 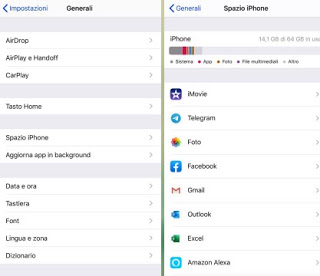 In addition to this simple menu, we can get even more precise information by connecting the iPhone to a PC via cable and opening the app iTunes already previously installed. From the app we can immediately see the space occupied by pressing the iPhone icon at the top right (immediately below the menu Controls) and moving the mouse cursor over one of the colored bars at the bottom.

Now we will know exactly which category takes up the most space and where we need to intervene in order to free up internal memory.

How to free up memory by deleting useless apps 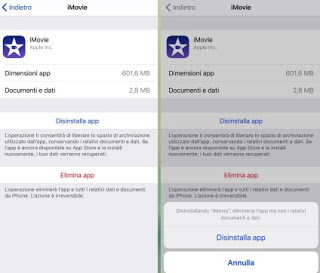 By doing so we will recover space in the internal memory but, if we reinstall the same app in the future, any data generated with it will also be restored.

How to free up memory by clearing the Safari cache

If we often surf the Internet the internal memory will be occupied by cache files generated by the sites, which can fill the memory in a constant and almost invisible way.
To clear the Safari cache we open the app Settings, we press on the voice Safari, scroll the screen until you find the item Clear website data and history, let's reward ourselves and confirm the cancellation by pressing on Clear data and history. 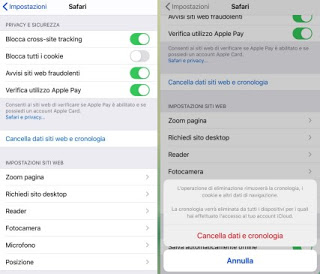 This will free up all the space occupied by the websites you visit.

How to free up memory by deleting photos and videos

Most of the space will be occupied by photos and videos that we shoot with iPhone cameras or that we receive in group chats on WhatsApp or Telegram.
To avoid that the memory becomes saturated with photos already saved in the cloud, let's take the path Settings -> Photos and activating the voice Optimize iPhone space. 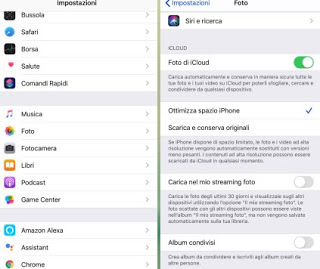 By doing so, all the photos and videos in high resolution will be automatically compressed as soon as the space on the iPhone starts to run low, so as to recover a lot of space without doing practically anything (the iPhone will take care of optimizing everything).

If, on the other hand, we want to delete the photos already present on the cloud from the device, we must use the Google Photos app, also available on the iPhone.
Once you have downloaded the app, make sure to activate the unlimited synchronization via the cloud, then press the icon with the three horizontal lines at the top left, press the item Free up space and we confirm the deletion of the photos and videos that are already present on the Google cloud. 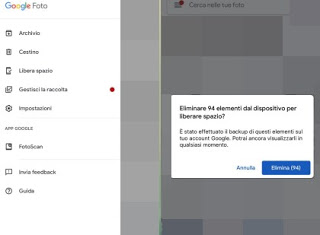 Doing so will free up space on our iPhone without losing the photos and videos already saved: just open the app and view the photos on the cloud, without taking up more space.
In this regard, we can also view the photos via the Web, as seen in our guide How to use Google Photos and all its automatic and manual functions.

How to prevent memory from filling up with messaging apps

As we noted in the previous chapters, most of the space problems are due to messaging apps, which store a large number of multimedia elements in memory; to avoid this type of problem we will have to act on the individual apps. 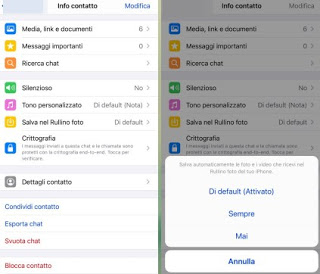 If we want to apply this change to all chats and groups, just go to the path Settings -> Chat and turn off the voice Save to Camera Roll.

On Telegram instead we can choose to automatically delete the photos that we do not open and that we have not viewed for a long time, so as to automatically recover space. To activate this function, open the app, press the bottom right on Settings, let's take the path Data and Archive -> Archive Usage and scroll the slide at the top. 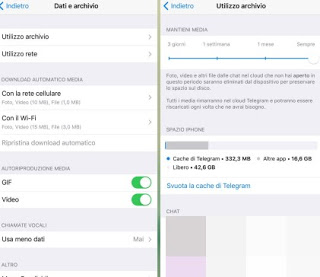 By setting a 1 month the Telegram media retention time will delete the photos and videos on the iPhone that exceed this deadline, still allowing you to re-download the media within the chat or group (since everything is saved in the cloud).
On the same screen we can also press on Empty the Telegram cache to immediately recover a lot of space occupied by the app.

To these tricks we also add the third, which will show you how access Facebook from the site by deleting the Facebook app which is the largest and the one that creates the most temporary and useless files of all.

Although 64GB of internal memory may seem like a lot, they can quickly fill up with apps installed and photos / videos shared in chats! Fortunately, the iPhone offers various tools to keep the memory of the device under control and, by working with some apps, we can quickly recover the lost storage space.