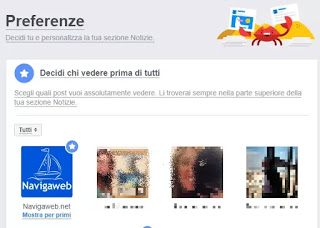 The order in which the posts are presented on the Facebook homepage is governed by the algorithms that, based on a person’s reading habits, first presents the news of some friends rather than others.
While those who have few friends may not need to manage Facebook algorithms, those who have more than 300 and follow different pages and groups, may find it rather tedious to have to read uninteresting posts, without finding instead what their closest friends publish or those people you trust the most.
This algorithm is a bit similar to the one used by Google to establish the order of search results.
Some updates of friends are considered more important than others, for example, a photo uploaded is presumably the most important of the sentimental change of status, while others end up at the bottom and, if you have many friends, it will be difficult for them to be read.
Many factors influence what appears in the Facebook news flow but, mainly, we could extract two decisive determinant factors:
1) The posts on which we spend more time (Facebook measures the time in which we remain to look at a post or a photo)
2) The Posts of friends with whom you interact more through comments and reactions like the Like.

To choose the main news to read first hiding instead of the updates and the posts that we like less, you can use some tools that allow you to manage Facebook algorithms and, over time, to have an engaging and interesting flow of more relevant and certainly true news.

Stop following those who publish fake news or too extreme political news
We all have at least one friend who unleashes his black soul on social media, revealing us different from how we know them, venting anger and resentment by always posting negative messages or news from extremists often not even true.
Even if the temptation to remove friendship can be strong, it would still be unpleasant to do it, especially if this friend often sees it.
So much easier and more discreet is to stop following him without letting him know (which is no longer followed is not warned about this).
To do this, go to the person’s profile and press the “button follow already” to select the option”Stop following“.
In addition, if you want to make sure that he too sees little of what we share, you can click on Friends and select the option Acquaintances, special category for organizing less important friends.
Lastly, it should be noted that it is also possible to include these people on a restricted list, which can become practically like removing friendship, but without letting them know.

1 BIS) If desired, it is also possible to make a temporary choice.
Instead of stopping following someone, the option can be used pauses, in order to hide someone’s posts from Facebook for 30 days.
This can be particularly useful, for example, in the period before political elections or after a football game that has made us suffer.
To find this option, press the button with three lines that appear in the post on the homepage.

In the opposite case of close friends or people whose opinion is respected or even particularly attractive friends of whom you do not want to lose even a photograph, then you can choose, by pressing the Follow button, the option Show first.
If you want to keep these friends first in order of importance, they can be added to the list of closest friends, by clicking on the Friends button in their profile.

As seen in the past, it is possible to activate or deactivate these options, that of “not following anymore” and of “Show first” on Facebook in the news section preferences

From these settings, you can find the list of friends and quickly choose the ones you want to read posts from and those, you prefer to keep hidden.
The preferences menu now has four options: see the news with priority, stop following people, restore contact with people not followed, find new pages.
The first option, that of news to read first, allows you to select pages and people you always want to see first in the News.
You can select up to 30 accounts whose latest updates will always appear first in the feed.
The messages and the updates of these accounts are indicated with a star, to remember to have selected them as a priority.
These settings are precisely those intended to manage Facebook algorithms and are valid for both friends and followed pages.

news section preferences they are not found in the general Facebook settings, but in the main home.
You must click the button with three lines that appear by moving the mouse over the News line in the left sidebar menu.
We can, therefore, see a summary that tells us which people we read the most and also which friends we no longer follow (they are still among friends, but we stopped following what they write).
In the following sections, it is possible, quickly and easily, to select who to follow and who not among Pages, People, Groups, and Apps, see the various lists automatically sorted by importance according to the news we have read so far.
Finally, in this way, we can stop following the groups to which we have been added without knowing it.
In the past, we have talked about how to clean up Facebook by hiding news from boring sites, groups, apps, pages and friends.

If you encounter a type of news that you don’t want to see anymore, it’s possible, instead of stopping to follow who shares it, to hide it.
To do this, press the three-line button next to the post and then use the “Hide Post“.

5) Cancel the Facebook algorithm and sort the news in chronological order.

Only in the case in which few friends and few pages are followed, the option to order the news in chronological order, without relying on algorithms, maybe good.
This allows you to see all the posts depending on the date they were published.
To do this, click on the three lines next to the link News top left and choose the recent news instead of the main news.
If you have many friends this option becomes inefficient because you would end up seeing in the home every nonsense published without any filter.

6) Remove yourself from groups

Unfortunately, on Facebook, it is possible to be added to the groups without being notified and without our authorization.
The result is that you will see news from the groups in which we have been added even if we are not interested.
To solve the problem it is necessary to go to the Groups section in the sidebar (or from the link https://www.facebook.com/groups/) and remove the subscription to those in which we do not want to participate or receive updates.

Twitter: the social network resists the takeover with the poisoned pill procedure