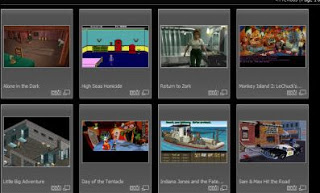 As we have seen in the free games section of this blog, there are many possibilities to play the PC for free (see 30 games to download for Windows Linux and Mac computers), without having to buy any games and with videogames that, like graphics, variety and playability , have nothing to envy to commercial ones. Some of these games are open source and non-profit developed, other times they are backed by sponsors and premium accounts and most of them are also online and multiplayer. Other computer games from the 80s and 90s were very funny but were later abandoned by their creator, later called “abandonware”

A possibility that is sometimes overlooked however is that of play those old games that were commercial and sold in stores until a few years ago but that have now been released by copyright e you can download them for free without licenses and legally. A lot of commercial games become free over time and completely free. Let’s see then i best sites to download old pc games for free, those defined as “abandonware”, those of the old Dos computers and even some more recent ones that the publishers have released and no longer developed further. The sites are many, here we see some that collect many titles and offer the link for direct download.

1) Super Nintendo and Sega emulator sites with many old, historical and great classics online games, all playable via the browser.
In another article, the collection of best classic arcade games to play on the online browser

3) Abandonia is a broad index of old games in which they are mostly present the classics for DOS.
Abandonware is games (or software) that have expired copyrights or games that are no longer supported by the publisher.
At the moment, the Abandonia database hosts 1,063 downloadable games and has a total of over 100,000 registered users. Most games are also reviewed with the addition of images and an evaluation by the reviewer and users. It is possible to consult and download old PC games by filtering them by name, by year of release, by vote and by category. There are no newer games because the site focused on the DOS ones, ie those that were there before Windows arrived. Among the categories are Action, Graphic Adventures, Sports, Arcade and Shooter, Puzzles, Strategy, and several others. The site navigation starts from the top menu with the Featured games menu or from “Site Navigation” by going to “Archives”. The most popular titles, of course, are the famous ones played on the PC, on the Amiga or in the arcade, including, for example, Super Mario, Alone in the Dark 1 and 2, Monkey Island, Indiana Jones, 007, StarFlight, Wing Commander, Theme Park, ghostbusters, etc. etc.

4) The website Play Classic Games allows you to play many classic DOS and old console games online for free. Among the best games on the list are, at the moment, Doom, Warcraft, Duke Nukem 3D, Sim City, Wolfenstein 3D, Sid Meier’s Civilization and The Lion King.

5) DOS Game Archive is another site focused on DOS games. Their goal is to preserve the old glories of video games and make sure they don’t get lost over time. It contains over 1,600 games to download including various different patches and saves. This time the website interface is better and you can browse the games by name, category, date or popularity. There are no reviews but you can find the titles you want faster by also looking at the cover. Among the games, there are titles like The Settlers, Dunes 1 and 2, Warcraft, Powermonger, Sensible Soccer, Larry Leisure Suite, Doom, Duke Nukem, Star Wars, Quake, GTA, Death Rally, Blood and many others.

6) Another site that holds on a wider range of non-DOS and therefore more recent games is Retrogames.
This site does not contain qeui free games but only commercial ones that have been released by licenses and that once were paid and bought at the store. The navigation of the site is not optimal and for how it is made it is not really easy and fast to find the titles that you want to download but, to the inside, looking for, there are some really old mythical games. Fortunately, you can order games for the given vote, seeing the best and most downloaded games. some of the games can also be played online and at the moment among the top 10, there are: Subspace, Castle of the Winds, Warzone 2100, One Must Fall 2097, Descent, Doom, Wild Metal Country.

7) Wikipedia is definitely the site that contains the most exhaustive list of old commercial games that are now free. One of their pages is often updated with new titles of older video games, in a list with easy reference in alphabetical order, with a brief description and the year in which they came out. Since it is Wikipedia, if a game that you knew was not found, you can easily add it to the list

8) Classic Arcade lets you play old games converted to flash games directly online; for example, fighting games like Final Fight or Street Fighter and games like Pacman and Donkey Kong can be found.

9) The Atari Games are redone and online they are playable on the official website of the famous production company.

10) Classic Reload is a free online site that allows you to play thousands of classic PC games without downloading anything. The site features games for Windows and DOS, console games and classic old console games, all in HTML5. Among the most famous games in the collection are Doom II, Sid Meier’s Civilization, Warcraft II: Tides of Darkness, Turrican II, Day of the Tentacle, Ultima Underworld, Darklands.

11) The Video Game Museum is a site where you can review images, videos, music, endings, reviews, tricks and names of old games of the past.

12) MyAbandonware It is one of the richest titles sites of old PC games, with many famous names.

Among other resources to find and download Dos games, abandonware and old commercial games today we can mention for free other sites:
– Playretrogames
– TheOldComputer
– DosGames
– snesfun
– Game Oldies

In another article, 10 classic games to play online: Pacman, Invaders, Asteroids, Arkanoid and others

On another page instead, you can do the MAME and ROM downloads to play on PC, the old arcades of arcades.

The history of video games is like the history of cinema, it must never be forgotten even if the youngest ones may not like them like us.

Find the System Settings in Windows 10

How to transfer photos from iPhone to PC

PC turned on but nothing is seen, how to solve