Home iPhone Special features iPhone X and iPhone 8, who should buy them? 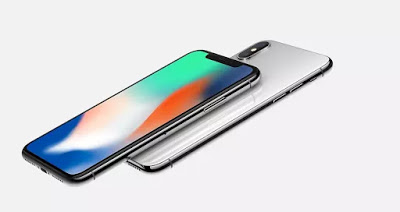 The iPhone X is described as by Apple as the best of its products in the last 10 years, and although each new iPhone has been described in the same way in the past, this time there is a fund of truth.
The iPhone X, presented by Apple along with the iPhone 8 and the iPhone 8 Plus, is actually an innovative smartphone, with unique features that until now had not yet been seen all together in one mobile phone.
While the iPhone 8 seems the usual evolution of the previous model, even if a little more powerful and with wireless charging, the iPhone X is the true successor of the original iPhone, with an elegant design, higher quality materials and a extraordinary power that makes it a true evolution of the smartphone, smarter and smarter than ever.
Wanting to summarize the impressive features of the iPhone X (which is pronounced iPhone Ten or iPhone 10) we can describe it in 6 points.

The iPhone X is powered by the new Apple A11 Bionic six-core processor, one of the most powerful chipsets that can be found on a mobile phone to date.

Unlike any other iPhone, the iPhone X is all glass, with a smooth stainless steel band that runs around the edges.
The curved front glass covers almost the entire front of the phone except for the top panel.
The iPhone X is equipped with an OLED 1125 × 2436 5.8-inch display, which Apple proudly calls the Super Retina Display, is bright, bright, rich in color, suitable for displaying crisp and vivid images, which includes almost all the face of the camera.
There are power, suspension and volume buttons on the sides, but the screen no longer has a Home button in front.

On the iPhone X, there is no longer the Touch ID and Apple has introduced a security system based on face recognition, the Face ID.
Unlike Touch ID, the new Face ID has less chance of being cracked and can only be mistaken for one in a million.
Face ID uses the infrared sensor to project over 30,000 rays onto the face of the person framed so that they can be accurately recognized by analyzing all the contours of the face.
In practice, to unlock the iPhone just look at it and then touch the screen and swipe upwards.

In line with the trend of 2017 and carrying on the legacy of the iPhone 7 Plus, the iPhone X is equipped with a double camera on the back, vertical instead of horizontal.
These are two 12-megapixel sensors composed of a wide-angle lens and a telephoto lens.
Both of these lenses combine to produce images with the Bokeh effect, which is the Portrait mode with blurred back.
The dual camera of the iPhone X stands out from the other phones because it is able to change the lighting conditions automatically based on the background and the foreground and has some special features like the Contour light, Stage light, and Studio light.

Animoji is faceting to send in chats that move according to our facial expression.
In essence, the emojis come alive depending on how we look at the iPhone, so as to give it the same expressions as ours.
Animoji can be sent to the Messenger app on iOS 11

iPhone 8 and iPhone 8 Plus 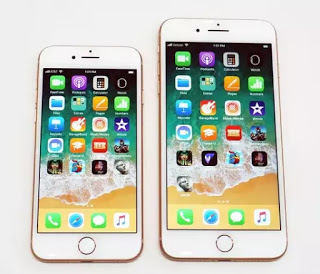 As for the iPhone 8 and 8 Plus, instead, the news is smaller than the iPhone 7 from which it takes up almost all the main features.
The design changes slightly, with steel reinforcement for the back and the front, with aluminum on the sides, with a 4.7-inch screen on the iPhone 8 and 5.5 inches on the iPhone 8 Plus.
Both have the A11 Bionic processor, the same as the iPhone X, and 12 MP camera sensors.
The Plus maintains the two-camera configuration of the 7 Plus, with a new delayed lighting mode very interesting for photographers.
Wireless charging is certainly an interesting update, although many smartphones have had this feature for years.

Speaking to normal people and not to Apple fans who change phones every year and sell the previous one, my personal advice is to buy the iPhone 8 or the iPhone 8 plus if we don’t already have the iPhone 7.
It is true that the iPhone 8 is a decent upgrade of the 7, with a faster processor and a sweeter appearance, but as a phone, it is absolutely similar and there are not that many differences in everyday usability.
For those who own an iPhone 6S, in my opinion, it can easily stay with that.
The iPhone 6S is still today one of the best smartphones in circulation so it’s really worth keeping it unless you already have battery problems.
Who has an iPhone 6 or an iPhone 5S could definitely find a new life with the iPhone 8.
Although the iOS 11 system will also come for these smartphones, probably, especially on 5S and SE, apps may feel slower as they will be more optimized for newer iPhones.
Who does not have an iPhone, could buy today the iPhone 8 or the 8 Plus, but could really find it more convenient, instead, to buy the iPhone 7 or 6S that will drop in price substantially in the next 6 months and, above all , which can easily be found at affordable, used or reconditioned prices.
The iPhone 8 costs, in Italy, 840 euros while the iPhone 8 Plus 950 euros.

Who should buy the iPhone X?

Here the iPhone X is a phone bomb, extraordinary in its functions, which will surely find many imitations in the months to come.
This is a smartphone that everyone will want to have, even if not everyone can.
The problem of the iPhone X is everything in the price, which in Italy reaches unimaginable levels: 1190 euros for the 64 GB version, 1360 euros for the 256 GB version which is a disproportionate figure.
At this point, those who have no money problems will also do well to spend it on this iPhone X, but for most people, it really seems like a luxury.

How to update an iPhone

How to use WhatsApp on PC and Mac